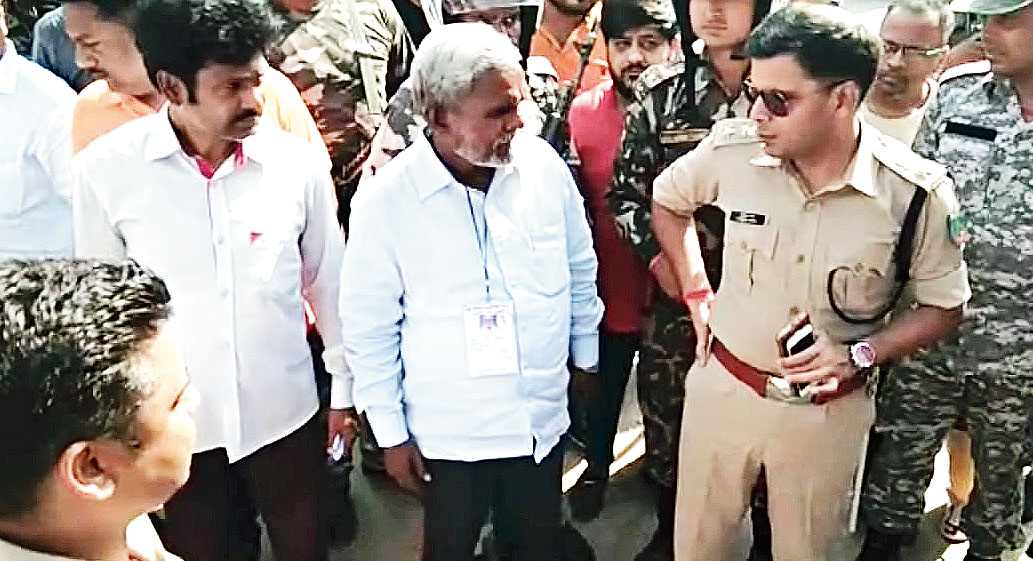 Violence at a Jugsalai booth over allegations of bogus voting by the supporters of mahagathbandhan candidate Champai Soren under Jamshedpur Lok Sabha constituency marred the sixth phase of general elections here on Sunday afternoon.

At least four policemen, including a jawan of Rapid Action Force (RAF), were injured in stone-pelting, prompting the police to cane the crowd. Six persons have been detained while 200 personnel, including Quick Response Team, Rapid Action Force and CRPF deployed at the densely-populated Millat Nagar and ME School Road, the flashpoints of the violence, where Section 144 of CrPC was imposed in the evening.

Trouble erupted at polling booth 168 at St John’s High School on ME School Road around 1.30pm, where so far polling had been peaceful.

Around 1.30pm, a group of 15 supporters of Champai Soren allegedly started casting bogus votes in his favour. To this, BJP polling agents raised an outcry. Apparently, Champai’s group bullied the latter who then informed the police. Jugsalai OC Nityanand Mahto rushed to the spot, followed by city SP Prabhat Kumar. The situation calmed down, but not for long.

At 2.30pm, JMM leader and alliance candidate Champai arrived at the scene accompanied by 20 party supporters. Allegedly, another heated exchange of words snowballed into Champai’s men manhandling BJP polling agents. Polling stopped. City SP Kumar came with a bigger team and controlled the situation. Then, allegedly, some youths of the minority community, allegedly Champai’s supporters, threw stones at policemen and houses nearby, targeting those of the majority community. In this, four policemen, including a RAF jawan, were injured.

The city SP then ordered a “mild lathicharge” to disperse the mob, which by then had swelled to around 300.

SSP Anoop Birtharay appealed to people on the streets through the public announcement system to go inside. Till 5.30pm, the SSP, city SP, DSPs as well as OCs of Bagbera, Jugsalai and Sakchi were busy bringing the situation to normal. Prohibitory orders under Section 144 of CrPC were clamped after 7pm.

Eyewitness Roshan Khandelwal who lives at ME School Road, said violence spread fast. He claimed three more booths, 169, 170 and 171 at the St John’s High School were affected as Champai’s supporters seized them after driving away BJP polling agents.

City SP Kumar said, “The situation had been brought under control after some residents indulged in bogus voting, but was again disturbed when Champai arrived at St John’s High School with his supporters. We are trying to detect those who attacked the police.” SSP Birtharay said police would be deployed at Millat Nagar and ME School Road in view of the tense situation.