Fines imposed on as many as 50 commuters 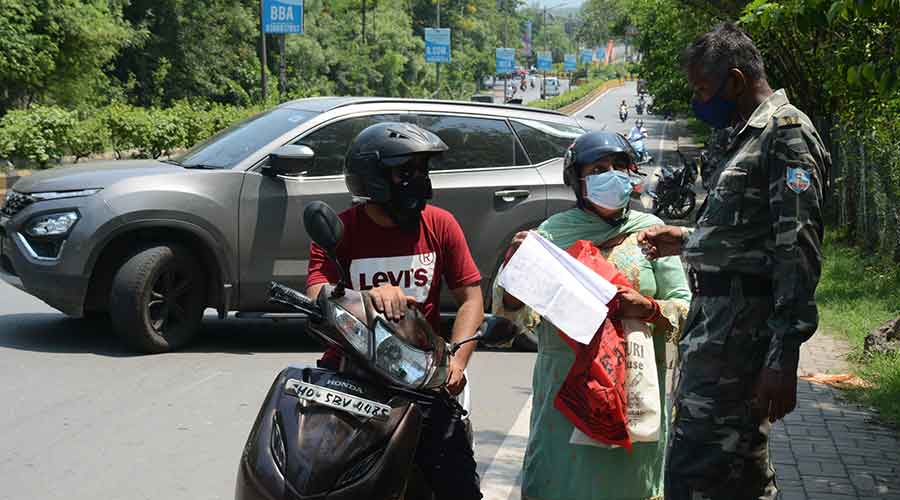 The East Singhbhum police launched a drive on Sunday to check e-passes, I-cards and other valid documents for travel during the state-wide lockdown in the steel city and other parts of the district to catch violators.

The documents were checked at various check-points that have been set up in bordering areas like Baharagora, Potka and Patamda.

Senior SP of East Singhbhum Tamil M. Vanan was also out on the road along with his subordinates checking e-passes of travellers at various places.

Fines for breaking lockdown rules and loitering outside without valid reasons were imposed on as many as 50 commuters.

The cops hit the streets as early as 6 am and remained on the streets under the scorching sun discharging their duty.

All roads, market places, state highways and NH-33 passing through the steel city wore a deserted look after 2 pm.

The fourth phase of the ongoing partial lockdown came into force across the state from Sunday.

The lockdown, or health safety week, will be on till May 27.

During the lockdown, intra-state bus movement will be prohibited while those using private vehicles, taxis, bikes for travel will need to have valid e-permits from the local district administration.

E-passes were also checked for those moving in cars and bikes, except for medical emergencies and funerals.

Industrial workers in Jamshedpur and the adjoining Adityapur industrial area were asked to produce a valid photo ID.