Advertisement
Home / Jharkhand / Shut for ever: stairway to the top

Shut for ever: stairway to the top 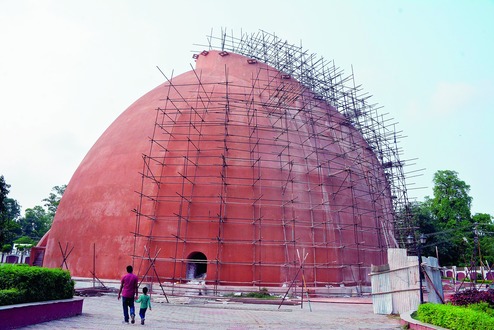 Patna: Visitors to Golghar, the iconic granary built by the British in 1786 which has become a symbol of the city, will no longer be allowed to climb to the top.

The Bihar government has decided to ban people from negotiating the 142 steps leading to the summit - a height of around 29 metres - that gives a panoramic view of Patna and the Ganga flowing on its north to preserve the monument for posterity.

"Golghar is under repair. The Archaeological Survey of India (ASI) is taking care of it. We have decided not to throw it open for people to climb it because it is an old building and we cannot allow much load on," a source in the art, culture and youth department told The Telegraph.

The source gave the example of the 12th century Qutb Minar in New Delhi, which tourists climbed till the early 1980s using the spiral staircase built inside. However, it was stopped after 45 people were killed in a stampede in 1981 that happened after the staircase lights failed. However, people visiting Golghar will get a chance to enter the dome-shaped building to witness laser shows that will illustrate the history of Patliputra - as Patna was called in ancient times.

Renovation of the monument was needed after it developed structural defects, stresses and large longitudinal cracks, salt action on its walls and water-logging around its foundation.

Experts said these were due to ageing of the monument, load of thousands of tourists who climbed it daily, and the effect of vibrations due to plying of heavy vehicles on the road adjacent to it.

The monument is protected under the Bihar Ancient Monuments and Archaeological Sites Remains Act, 1976. The state government decided to rope in the expertise of the ASI for its conservation and renovation on August 11, 2010.

Repair work was to be completed in two years, but still remains unfinished for the want of just Rs 10 lakh, which the state government is not providing to the ASI.

"The major portion of the renovation and conservation work is complete and the main challenge of repairing two huge longitudinal cracks has been successfully achieved. Repair of the two staircases leading to the top and a coat of plaster on the outer surface remain. We are yet to get the money from the state government to do it," ASI superintending archaeologist (Patna circle) D.N. Sinha said.

State archaeology director Atul Kumar Verma said the money asked for by the ASI in addition to Rs 98 lakh already given to it is not being released by the treasury.

Directions to build Golghar were given by then governor-general Warren Hastings after the great Bengal famine of 1770 in which an estimated 10 million people lost their lives in the lower Gangetic plain.

It was part of the plan to counter famines.

East India Company engineer John Garstin started its construction on January 20, 1784, and completed it on July 20, 1786. It was built with bricks, Surkhi chuna (lime and powdered burnt red terracotta) plaster.

Food grain was to be stored by carrying it to the top via stairs and dropping it inside through a two-and-a-half feet hole. However, grains could not be stored in the 96-foot tall stupa-like building due to an inherent defect. Its doors opened inside; this meant that once filled, the doors could not be opened, a feature that has given the sobriquet "Garstin's folly" to the monument. Garstin is buried in the South Park Street cemetery in Calcutta.