Won't go back to village, Giridih lynch survivor and milkman Usman Ansari, 50, said this morning, speaking for the first time after Tuesday's savage attack on him from his bed at Dhanbad's BCCL-run Central Hospital. 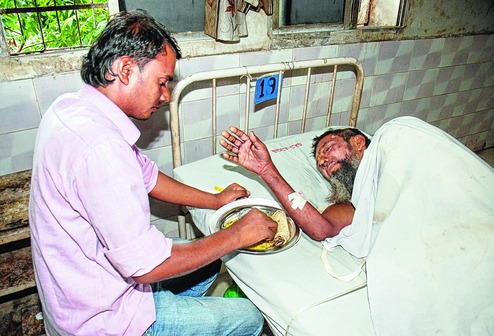 Dhanbad, June 30: Won't go back to village, Giridih lynch survivor and milkman Usman Ansari, 50, said this morning, speaking for the first time after Tuesday's savage attack on him from his bed at Dhanbad's BCCL-run Central Hospital.

There is not much to return to at Barwawad village in Giridih either, with his house and cowshed burnt down by the mob, including people from his village, that attacked him with stones and sticks early on Tuesday evening over rumours that he had slaughtered one of his cows.

"My cow had died of illness on Sunday (June 25) but as Id was the next day, I couldn't find a sweeper to dispose of the carcass. So I threw it near a bush. That's all I did," Usman said. "Another milkman, Domi Vishwakarma, whose calf had died, did the same," he added, probably to indicate that mobs did not target a Hindu man.

Police, which rescued the Ansari family with difficulty - his wife Aamna Khatoon and two sons Salim and Alim who stayed with him at the village were also roughed up but Usman was the main target - had said from the very start that the cow died of illness and its throat slit later to give the impression that Usman had killed it.

Did he have any idea of who the mischief-monger could be? Usman kept quiet. Prodded if he identified anyone in the mob, he kept quiet again. "My brothers are taking care of all aspects of the case," Kalim, Usman's middle son, who was in Giridih town on the day of the attack, interrupted. "Don't ask him too many questions, he has been hit on the head and doesn't remember too well."

"Some villagers were jealous of our dairy business and our grocery shop," Usman said. Barwawad has around 250 households of which around 45 are Muslim.

Usman said he first sensed a buzz of hostility on Tuesday morning, the day after Id. Around 11am, some villagers had started questioning him what happened to his cow, and did they slaughter it for beef. He didn't expect the hostility to snowball to such a scale barely five hours later when a mob of around 100, armed with stones and sticks, stormed to his house.

"They accused us of killing the cow to eat beef. Their numbers kept growing. They kept hitting me, hitting my wife and sons. Mostly, they hit me. Then, some people set my house and cowshed on fire," Usman recounted slowly.

On the suggestion that he could go back and find out, Usman whispered "No."

"If the police had not saved our lives, I wouldn't be here now. I can't go back," he said. His son Kalim added, "We may become poorer still after leaving our village but we won't return to risk our lives."

Giridih SP Akhilesh B. Varrier said no fresh arrests had been made today in the case. Of the total three FIRs filed yesterday, one by Usman's wife and two by district administration (local BDO and a mukhiya) based on available video footage and photographs, 13 of the 31 named accused were arrested yesterday.

Giridih DC Uma Shankar Singh said prohibitory orders would be lifted from the area from tomorrow. "Things are peaceful now. Till last night, we took out several rounds of flag marches. High alert had been sounded yesterday after the Ramgarh lynching," he said.

The state government will bear the cost of treatment of Usman and supposed bystander Krishna Pandit, 22, who had been injured in police firing. Usman, who has developed clots in his hands, has been referred to RIMS, Ranchi.