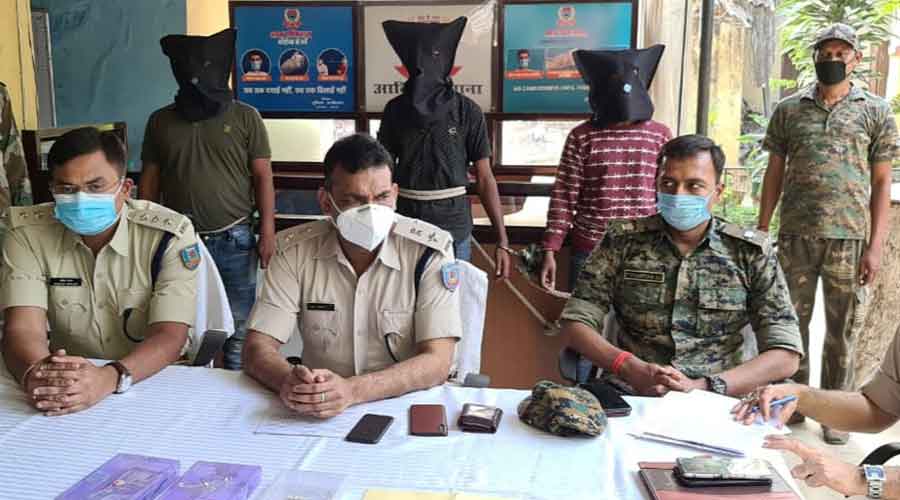 The Seraikela-Kharsawan police arrested three activists of outlawed outfit CPI-Maoist from Chandil thana area of the district about 25 kms away from here on Monday.

The three rebels are active members of Maharaj Pramanik's group in the Chandil-Chowka-Ichagarh stretch in the Chandil sub-division and Kuchai as well as in Kharsawan region of the district.

They were identified as Malindranath Majhi, 32, Sujit Munda, 24, and Chamburam Munda, 20. The three are residents of Seraikela-Kharsawan and were caught soon after extorting money from a businessman.

Seraikela-Kharsawan district SP, Mohammed Arshi said that the police had information about rebels likely to visit a place at Urmal locality in Chandil thana area on Monday morning.

"Having got the intelligence input, we set up a taskforce of OCs Chandil, Ichagarh and Kharsawan police stations and sub-divisional police officer, Chandil. A company of CRPF's 193 batata was also engaged in an operation at Urmal. Eventually, the taskforce succeeded in nabbing the insurgents," said Arshi at a press conference at Seraikela on Monday afternoon.

"On being searched, the police recovered Rs 5,000, naxal literature and four cellphones from the trio’s possession. On being interrogated, the rebels confessed that they are active members in Maharaj Pramanik squad and had come to Urmal to collect extortion money from a businessman, "said the SP.