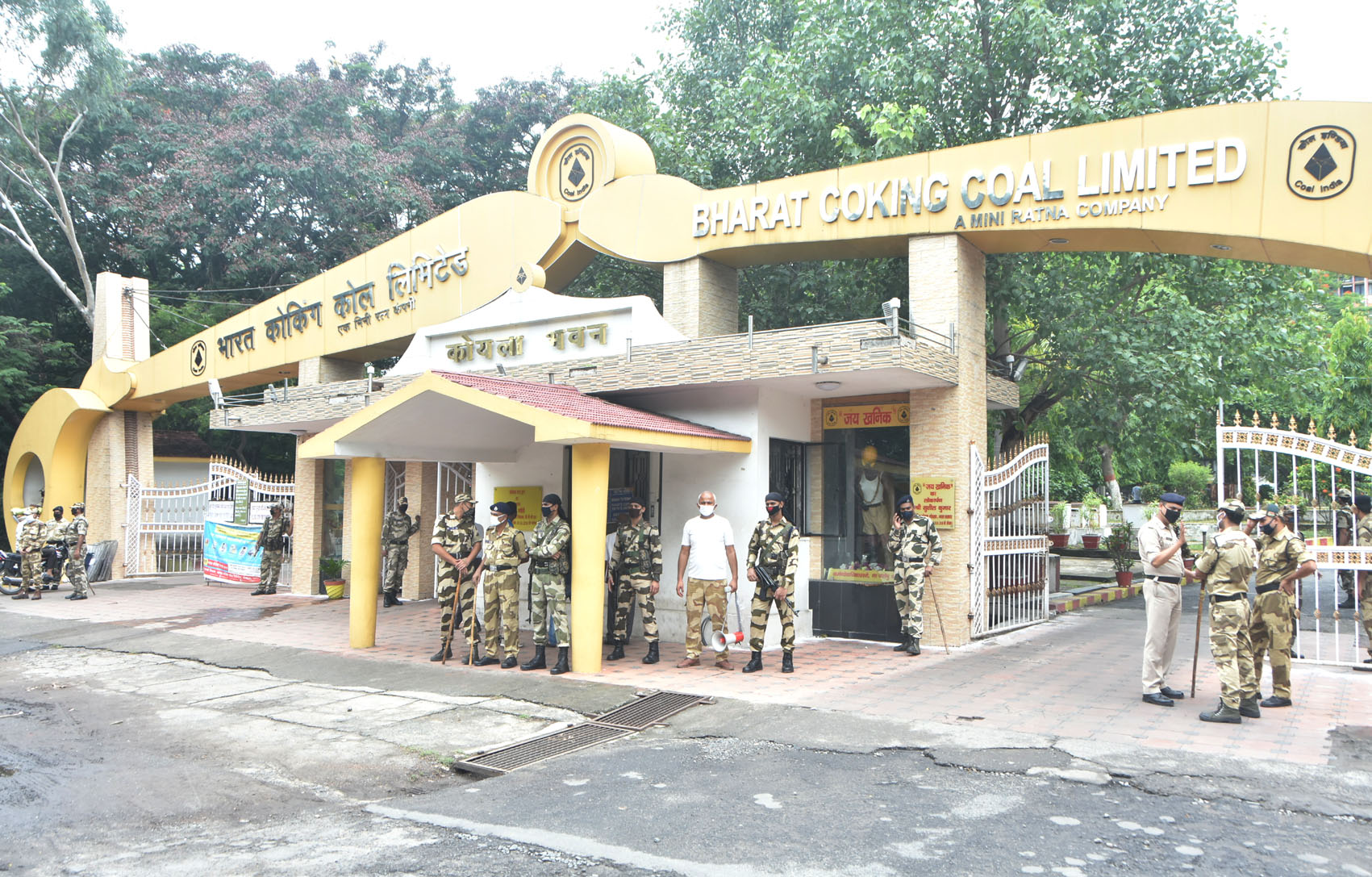 CISF jawans on guard at the main gate of Koyla Bhavan, the BCCL headquarters in Dhanbad, on Thursday. The day saw several demonstrations against the Centre’s decision to allow coal mining for commercial purposes
Gautam Dey
Our Correspondent   |   Ranchi   |   Published 18.06.20, 08:52 PM

As the Union government on Thursday initiated the process of auctioning of coal mining for commercial purposes, Jharkhand Janadhikar Mahasabha, a group of rights body, has called for mass protests at gram sabha levels across the state dubbing the move as crony capitalism by the Centre. The central government today

On the day the Centre initiated the auction of 41 coal blocks, including 20 in the state, Jharkhand Janadhikar Mahasabha issued a statement decrying the idea.

“Ironically, the move, touted as an atmanirbhar initiative, takes away all ownership rights of land-owners and gram sabhas and opens up natural resources for more corporate plunder. It is deeply worrying that Jharkhand government has extended support to the central government’s decision. But the fact that the state has asked for a moratorium period of 6-9 months indicates that it is not fully on-board this decision,” it said.

The detrimental impact of allowing commercial coal mining on the domestic coal industry and market was well documented, it noted. The state said that the “most worrying aspect” of the decision was that it overlooked the staggering impact on the lives of landowners, people living nearby and the environment.

The mahasabha had organised an online meeting on Wednesday to discuss with experts and activists the impact of the Modi government’s decision in Jharkhand.

“Jharkhand, as one of the richest mineral states, stands witness to the fact that rampant mining, especially in corporate interests, does not improve the wellbeing of the people. Needless to say, mining, especially of coal, has significant environmental and human costs. Opening the state for domestic and foreign corporate mining entities will further destroy the livelihoods and environment. Mining companies, supported by the government, flout laws that aim to check environmental degradation, left, right and centre,” read the official statement.

It also said that the decision also violated several legislations and constitutional provisions that aimed to protect the poor and marginalised and the rights of adivasis to self-govern.

The mahasabha added that the PESA Act and Fifth Schedule provisions defined the role of gram sabhas as primary decision-making bodies of a village. The Forest Rights Act also defined forests as the property of the community gram sabhas represent.

“The central government did not even bother to discuss the plan to auction coal for commercial mining with relevant gram sabhas,” said the statement, criticising the Hemant Soren government or not standing with its people despite getting a decisive mandate against the anti-people and pro-corporate policies of the earlier Raghubar Das government.