During the four months, special patrolling will be arranged round- the- clock 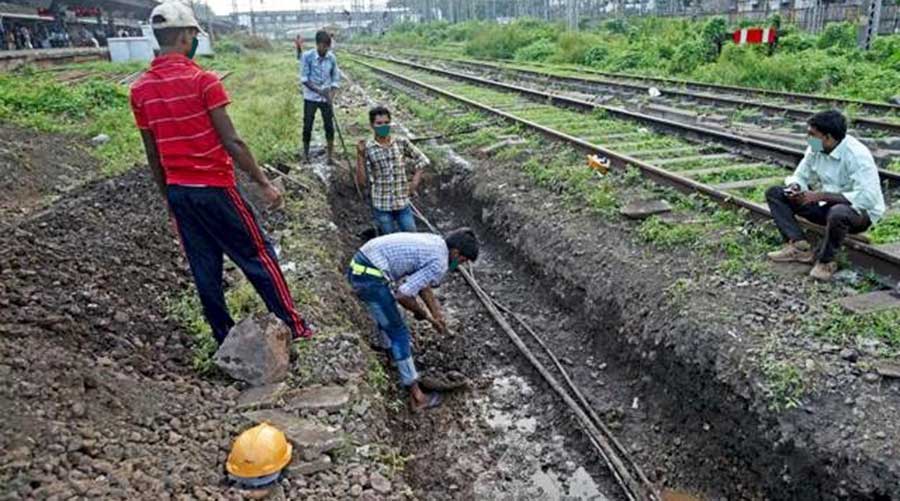 The South Eastern Railway has adopted various measures with a view to ensure safety of passengers and maintain disruption free services during the monsoon season.

All the four divisions of South Eastern Railway including Chakradharpur and Ranchi have undertaken different safety related maintenance works to minimise the effects of heavy rainfall on train service during the monsoon months of June to September.

Officials at SER's Calcutta-based headquarters said railway engineers and other staff are taking necessary measures to tackle any flood like situation near railway tracks for maintaining smooth train operation.

"Track maintenance work is being given top most priority and special patrolling of railway track has been planned during the monsoon season for safe train operation. Close watch is being kept on railway bridges and points and signals are under constant monitoring to prevent flooding due to heavy rain, "said Sanjay Ghosh, chief public relations officer of South Eastern Railway.

He went on to say that with a view to prevent water logging on tracks, obstructions like silt, vegetation etc. has been cleared from catch water and side drains.

Patrolling and watchmen teams have been planned for deployment at vulnerable points to adopt remedial measures if there is accumulation of water on railway track.

According to Ghosh, probable spots where water logging may take place have been identified for early action in case there is heavy rain. Pumps have been installed for prompt drainage of excess water.

During the four monsoon months special patrolling will be arranged especially in vulnerable locations round the clock.

"The bridges and tunnels are always kept on watch. To tackle any emergency situation in the event of heavy rain, sufficient quantities of reserve materials viz. boulders, sand, cinder, quarry dust, ballast etc. have been kept in stock. The engineering relief vans alongwith equipment have been kept ready at strategic points, "he explained.

Apart from this South Eastern Railway is also in constant touch with IMD offices in Jharkhand and Bengal for weather updates and if any adverse weather condition is reported, preparations will be made accordingly for mobilising men and materials to tackle the situation.

The IMD has declared the onset of monsoon in Jharkhand, Bengal and other neighbouring states.

The Met department has also issued an alert of heavy rain in Jharkhand and Bihar in the next few days due to an active monsoon coupled with a low pressure originating from the Bay of Bengal.