Protests on demonetisation anniversary in Jharkhand 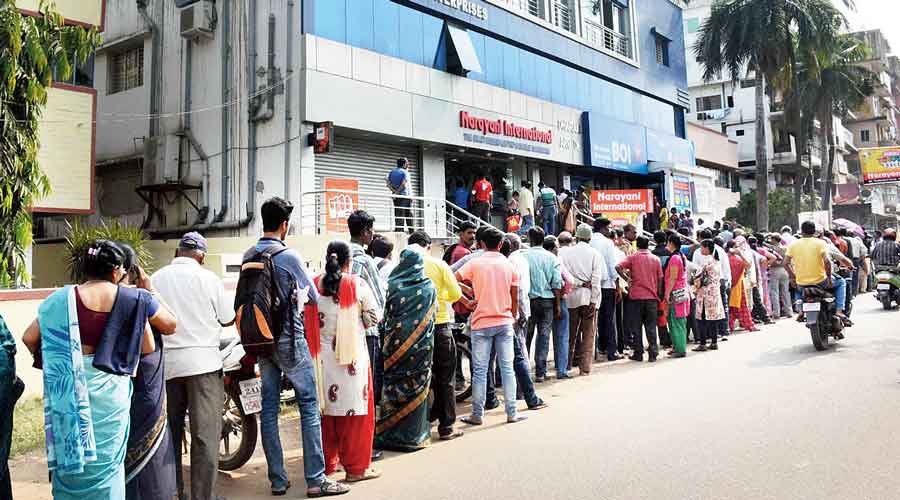 Trade unions, political parties in the ruling UPA coalition government, civil society organisations and human rights outfits would take part in protests in major cities of Jharkhand on November 8 to mark five years of demonetisation announced by the BJP-government at the Centre in 2016.

“We would be holding the agitation under the pan-India call of Financial Accountability Network India (FAN-India). We have already held talks with the Left-backed trade union and also with other political trade outfits especially Intuc and JMM. We will also hold talks with ruling UPA party leaders who have been vocal against demonetisation like the JMM, Congress and RJD. Protests would be held in landmarks at all big cities of the state between November 8 and 12,” said the tribal rights activist and member of FAN-India in Jharkhand, Aloka Kujur.

The demonetisation of high-denomination currency notes on November 8, 2016, created a nightmare for citizens that lasted several months. Long queues formed outside the banks and ATMs to swap denotified currency notes for new ones.

“Economic activity was severely dented for months. What the ruling BJP party thought was a masterstroke turned out to be a disaster. We will be showing short video films on the impact of demonetisation and false promises made by the Central government at the site of dharnas and also sharing it on various social media. At a time when the government is creating false narratives on GDP, fuel prices, economic recovery and so on it is important to highlight the plight of the working people of this country who have been pushed to the brink in the recent past,” said Kujur.

“Concerned civil society organisations, workers unions, social movements, peoples movements and concerned individuals from across the country will be marking their protest through dramas, public meetings, share videos and information on the impact of demonetisation, GST and lockdown. The day gives us an opportunity to look back at the last five years of policy changes, governance failures, scuttling of all space for debate and engagement both within and outside the parliament. Protests will be held in all states of the country,” said Delhi-based Priyadarshini, FAN India coordinator for the demonetisation protest.

“From the introduction of the pro-corporate farm bills, the dilution of the Environment Impact Assessment Notification by way of the 2020 draft alongside the dilutions proposed to the Forest Conservation Act (FCA), making detrimental changes to labour laws, demolition of slums, push towards the digital mode of education and financial transaction have all had a cumulative impact on the economy and lives, livelihood and employment of the country. We would try to make the people aware through the agitation,” Priyadarshini added.