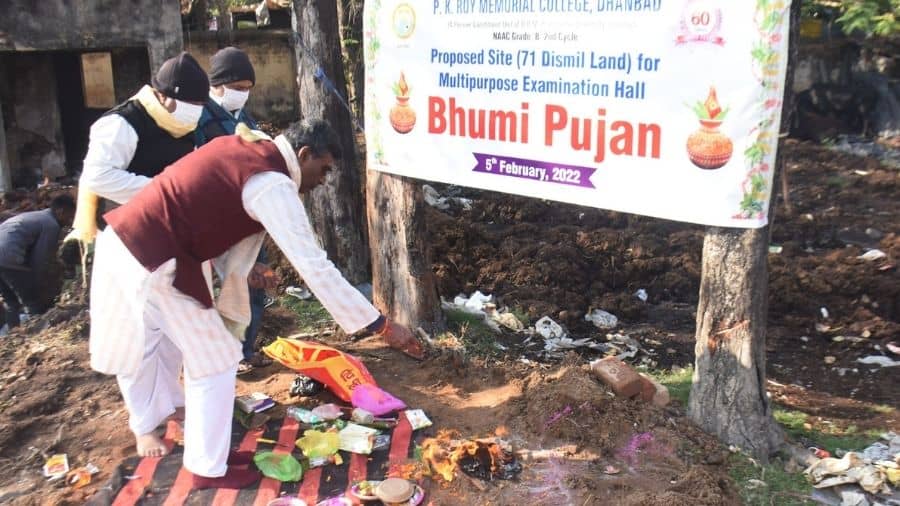 With the resolution of a long pending land dispute with IIT (ISM), process for the much awaited construction of the Multipurpose examination hall of  PK Roy Memorial College, a premiere institute under Binod Bihari Mahto Koyalachal University (BBMKU), began in Dhanbad today .

The ground breaking ceremony of the hall, which will be constructed at a cost of Rs 1.25 crore on 71 decimal of land, took place today in front of IIT (ISM). Principal BK Sinha, registrar of BBMKU Vikas Kumar, head of the department of English MK Pandey among others were present.

Talking to The Telegraph Online today, Sinha said, “The construction of the multipurpose examination hall, which will primarily be used for holding examinations, will also help in taking classes during the examination period.”

“Due to lack of separate examination hall, we used to often face difficulties in conducting regular academic activities,” he added.

Citing an example he said, “ During the examinations of odd semesters like semester I,III, V, we were compelled to conduct classes of even semesters like II, IV and VI during the morning shifts or vice versa putting the faculty members and staff under great hardship.”

Notably, the nod for developing the multipurpose examination hall was given by the district administration during a meeting with college administrators on February 3 .

The district administration's move on the other hand came in wake of December 14, 2021 direction of KK Khandelwal, additional chief secretary of the state Higher and Technical Education department to allot land to the PK Roy memorial college out of the 7.62 acers of land lying near the IIT (ISM) main gate.

Notably the plan for developing the multipurpose examination hall was conceptualized in 2005 at the state HRD department level and land near the (IIT) ISM campus had been identified in 2006 but procedural hurdles created delay in the handing over of the land,

The land, however, was finally handed over by district administration to the college on March 14, 2013 but objections raised by IIT (ISM), which claimed ownership of the land, again created delay in launching of the construction work.

Though the issue was later resolved mutually between PK Roy Memorial College and IIT (ISM) in 2017 but lack of state government nod for launch of construction work delayed the ground work.