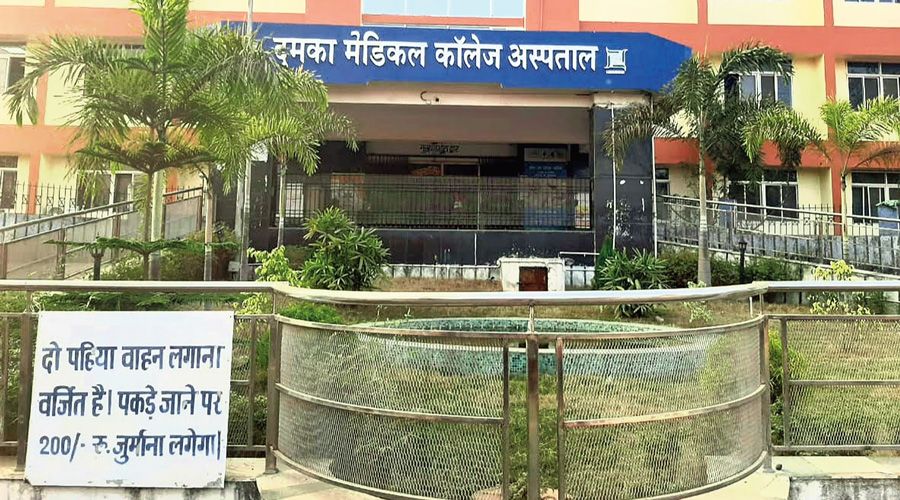 The body of 40-year-old patient of Dumka Medical College and Hospital (DMCH) in Jharkhand’s Dumka, the headquarters of the Santhal Pargana, was found in a pond, barely few meters from the hospital and the body was handed over by the police to the relatives, without mandatory post-mortem on Tuesday.

The development shows the height of callousness in the health department and the careless manner of the police machinery.

According to information, Sikandar Sheikh was admitted on Monday morning with diarrhoeal symptoms at the Dumka Medical College and Hospital. He was undergoing treatment at the hospital and not given any discharge letter from the hospital. However, on Tuesday morning at 9.30 am he was not found on his bed at the medicine ward.

Few hours later his body was found floating at the pond situated at the back of the hospital and the police were informed.

According to a local in Dumka, the Sikandar Sheikh used to sell meat at Jaruadih Mohalla in Dumka town and used to drink liquor.

When contacted superintendent of DMCH, Dr Ravindra Kumar, gave a weird explanation about the reason for the patient disappearing from the hospital.

“At times it happens that a patient feels perfect and healthy after his stay in the hospital and expresses desire to be discharged and is allowed to go out of the hospital. It might have happened in this case too. We will have to look into the CCTV footages to see how he left the hospital premises,” said Dr Ravindra Kumar.

When prodded further on if the doctor on duty at the ward had issued discharge slip to the deceased patient, Dr Ravindra Kumar said, “The patient was admitted on Monday with vomiting and loose motion and when the doctor on duty went on round at the ward at around 9 am the patient was not found in his bed. The doctor informed the concerned officials. Later we were told that the body of the patient was found in the pond. We are not sure how this happened. We will see the CCTV footages for any leads.”

Significantly, there are more than two dozen CCTV cameras installed at vintage locations of the hospital inaugurated in 2019. There are security guards doing duty on rotation basis round the clock at the hospital that puts question marks on a patient disappearing from the ward without anybody’s knowledge.

The police gave an even more weird reason for handing over the body to the relatives without autopsy.

“The relatives gave in writing that they do not want post-mortem and that he was admitted in the hospital and had died of natural reason. So we handed over the body without post-mortem,” said Dumka town police station senior clerk Ashok Kumar Singh holding charge in absence of officer-in-charge, Deobrata Poddar who is on leave.

Significantly, the hospital falls under Dumka town thana jurisdiction. Deputy commissioner Dumka B. Rajeshwari, however, promised to conduct a probe into the incident.

“We will investigate the matter and take action if any negligence is found on DMCH’s side,” the deputy commissioner said.