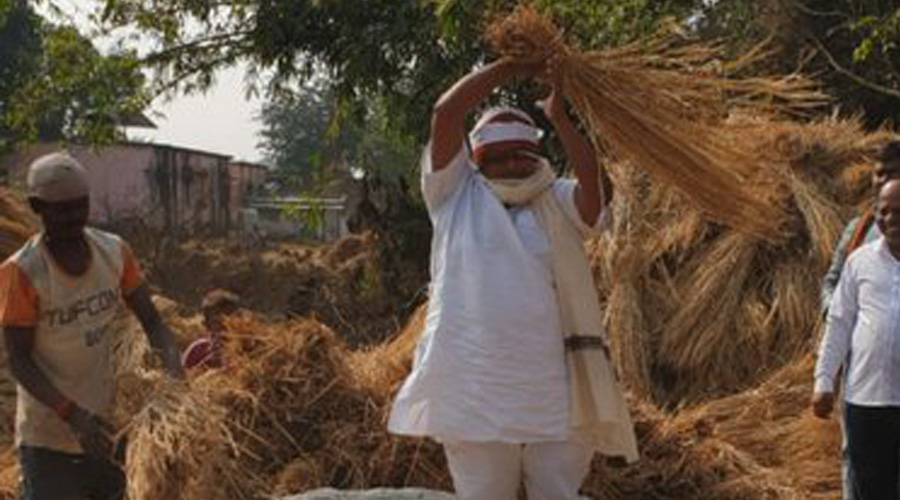 Agriculture minister Badal Patralekh working on a field at a village in Deoghar on Monday.
Telegraph picture
Our Correspondent   |   Ranchi   |   Published 14.12.20, 08:07 PM

Jharkhand will roll out a farm loan waiver scheme on December 29, the first anniversary of the Hemant Soren government, state agriculture minister Badal Patralekh announced on Monday, thereby fulfilling one of the key promises made by the JMM-Congress-RJD grand alliance during last year’s Assembly elections.

“Our government under the leadership of Hemant Soren will gift loan waivers to our farmer brothers on December 29, the day when this people-friendly government completes one year, he said during a visit to Baidnathpur village in Sariya block in Deoghar district.

“Loan waivers up to Rs 50,000 will be given in the first phase. The amount has been recommended by the high-powered committee set up by the agriculture department to work out modalities of the scheme. The proposal will now soon be placed before the cabinet for a formal nod,” the minister said.

The state government has made a provision of Rs 2000 crore for the loan waiver scheme in this fiscal. As per agriculture department figures, between 2014 and 2019, about 8 lakh farmers took loans to the tune of around Rs 7000 crore in Jharkhand.

Departmental sources said around 10 lakh farmers would be benefitted initially once the waiver is rolled out. “We are currently busy seeding Aadhaar details with bank accounts of beneficiary farmers,” commented an official of agriculture department.

Left parties stage a protest against the new farm laws at Raj Bhavan in Ranchi on Monday.
Telegraph picture

The minister added that the agriculture department was also working on an export policy to provide an additional market for surplus vegetables that are grown in Jharkhand.

“A few months back, we exported several vegetables to Dubai. Now, we are preparing a holistic plan to ensure that our farmers get the right market and competitive prices. An export policy will be finalised soon,” said Patralekh, who tried his hand at threshing of harvested paddy at the village.

Criticising the Union government over the new farm laws, the minister said, “Modi has forced our annadata to come out on streets today by its anti-farmer laws, while in Jharkhand, our government is working round-the-clock towards their welfare. The farm loan waiver will help scores of small and marginal farmers in the state,” Patralekh said.

The ruling dispensation in the state has been speaking out against the new farm laws, and actively supported the December 8 Bharat Bandh in Jharkhand. In line with Monday’s hunger strike by protesting farmers on the Delhi border, several Left and other non-BJP parties also held symbolic fasts near Raj Bhavan here.

The BJP on the other hand is gearing up for “sammelans” on Tuesday across the state to highlight the benefits of the new laws. Party general secretary Aditya Sahu said, “The party is holding farm sammelans across commissionaries and districts on December 15 to spread awareness among farmers about the new farm laws and prevent them from getting misled by those who are opposing the laws just for the sake of protesting against the BJP.”