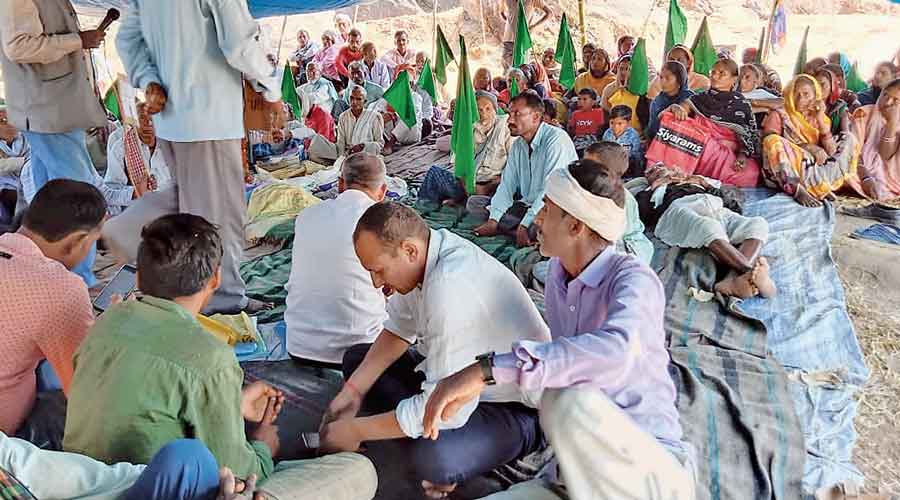 A deputy commissioner of a district in Jharkhand has admitted before the eastern zone bench of National Green Tribunal (NGT) that illegal mining has taken place in Dhajwa Pahad (hills) as people’s agitation against the mining activities entered 115th day on Saturday.

In the affidavit presented before the NGT on March 10, Palamau deputy commissioner Shashi Ranjan states: “Based on the complaint received circle officer Pandu conducted an enquiry and prima facia found that unlawful activities has been carried out by the respondent number 8 (Suraj Singh).”

The affidavit (a copy of which is with The Telegraph) further states, “a letter has been issued to respondent number 8 not to carry out any mining activities till further order.”

Villagers of Kutmu under Pandu block of Palamau district, some 50km from district headquarter and nearly 250km from capital Ranchi, have been staging protests for nearly 115 days demanding cancellation of mining lease for stone quarrying and action against the stone mafia.

The Dhajwa Pahad Bachao agitation began on November 18, 2021 as part of an effort to protect the hill from stone quarrying.

In the affidavit, the deputy commissioner has informed the NGT that a “high-level committee” has been formed to carry out an enquiry and the committee is in the process to enquire about the complaint which will be completed very shortly. “If the committee finds that the respondent has violated the laid down rules, action will be initiated against respondent number 8 as per the laid down provisions of the law,” the affidavit states.

The double bench of NGT eastern zone, comprising judicial magistrate B. Amit Sthalekar and Saibal Dasgupta, in its order on Friday directed: “If the committee finds that the respondent number 8 is illegally carrying on mining activities on a plot for which no environment clearance has been granted, the JSPCB shall compute environment compensation as well as cost of restitution of the environment and the penalty liabilities to be imposed upon respondent number 8.”

The next hearing of the case is on April 5.

The NGT eastern zone bench had in February directed the deputy commissioner to probe into allegation of illegal mining and submit report after stopping illegal activities based on a complaint by Anup Agarwal, legal counsel of Dhajwa Pahad Bachao Sangarsh Samity which is a loosely formed committee of the villagers to save a hill which had socio-cultural significance for the locals.

The villagers in the petition before NGT (a copy of which is with The Telegraph) claim that a Ranchi-based construction company — Shivalaya Construction Co Pvt Ltd — has been carrying out illegal quarrying at Dhajwa in tacit understanding with Suraj Singh. A lease was granted to Suraj Singh for plot no 1,046. However, stones have been mined in plot no 1,048.

“The stone mafia is working under the protection of the administration and the police. So many hills, or what used to be hills, have been quarried out illegally and levelled in the last two years in the district, and yet, there has been no action,” Yugal Pal, a Palamau-based social activist, alleged.