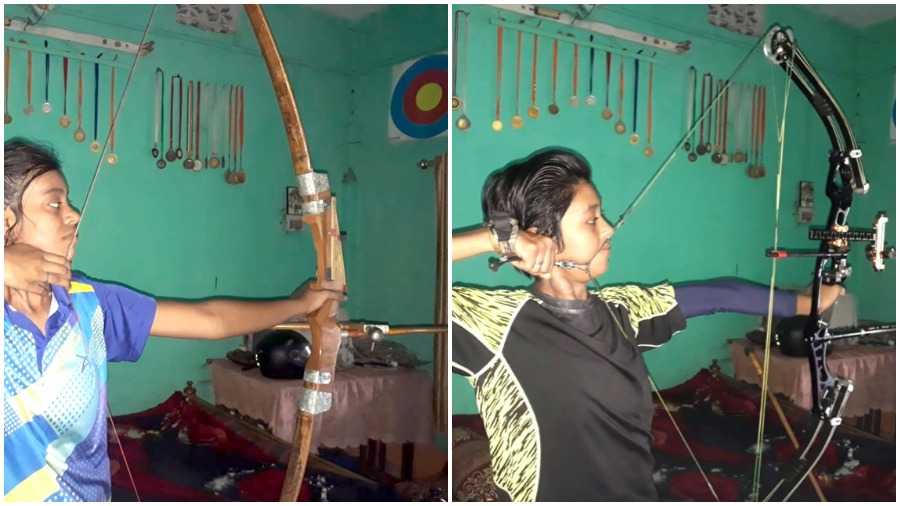 Deprived of bows, arrows and other equipment, necessary for regular practice, two archer’s sisters of Chasnala locality of Jharia, are unable to realize their dream to represent the country in the world cup and Olympic to win medals.

Meet Madhu Kumari (17) and Jyoti Kumari (14), daughters of Santosh Kumar Das, a small grocery shop owner of Chasnala area of Dhanbad.  Both these sisters together won over 40 medals for the district and state but failed to qualify for the sub junior national championship due to lack of regular practice.

Talking to The Telegraph Online today, Das said, “Both my daughters got attracted towards archery since early childhood and used to carry out practice regularly at the nearby forest of my house through bamboo made bows and arrows. They later got selected for the Tata Steel Jamadoba based feeder centre for regular training, where after rigorous training they honed their skills and Madhu has won 23 awards at district, state and national level while Jyoti has won 17 awards so far”.

The most significant achievement for them was in Inter School National Archery Championship held in 2019 at Sangrur, Punjab in which both Madhu and Jyoti won bronze medals in the junior and sub categories respectively.

Jyoti improved her performance in 2020 in the Inter School National Archery Championship held in Chandauli held between January 29 to February 2, 2020.

“I have purchased two old bows at a cumulative price of Rs 1.10 lakh including one of Rs 45 thousand and another of 65 thousand in 2019 by saving my hard-earned money but since the bows were old, they broke last year while the other is also not working properly and hampering their practice,” said Das, adding that since his income has shrunk during the pandemic, he is finding it difficult to purchase the bows, arrows again compelling their daughters to practice through bamboo based bows.

“We have contacted various people’s representatives and they have promised the moon but nothing has materialized on the ground.  Four days ago, chief Minister Hemant Soren instructed the Dhanbad district administration to take necessary steps after which Jharia Circle officer, Parmeshwar Sahu visited our house and noted down the necessary details of the achievement of my daughters and available equipments.”

“we are hopeful that now they will get some support that would help them to resume practice,” said Das.