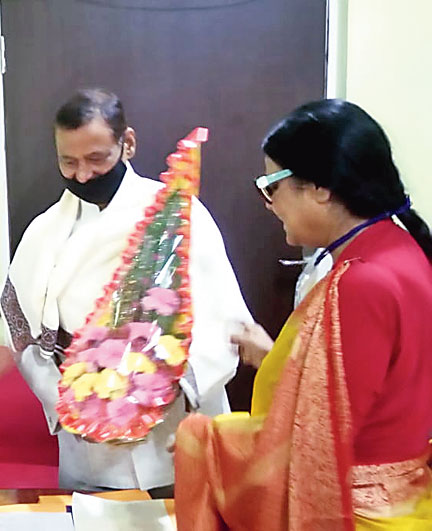 While exercising powers conferred on her under Section 10 (2) of the Jharkhand State Universities Act, 2000, she also appointed, on the advice of the state government, pro vice-chancellors at four varsities.

Minz was a professor at the Jawaharlal Nehru University, New Delhi, as well as the president of the JNU Teachers’ Association. She has now become the vice-chancellor of SKMU-Dumka, replacing M.K. Sinha.

Singh, who was a biochemistry professor at the Dr Ram Manohar Lohia Awadh University in Ayodhya, Uttar Pradesh, takes over from |S.N. Singh at NPU-Daltonganj.

Panda has been formerly the vice-chancellor of Sampurnanand Sanskrit University, Varanasi in Uttar Pradesh, and replaces Shukla Mahanty at Kolhan University.

Kamini Kumar, incumbe­nt pro VC of Ranchi University, has been reappointed as the pro VC of the same varsity.

Kolhan University’s new VC Gangadhar Panda on his first day in office on Thursday said he will work to ensure the employability of tribal students.

Appointed on Wednesday, on Thursday Panda received a warm welcome from his predecessor Shukla Mahanty and other university officials.

On his vision, he said: “There are tribal students in this region and my first priority would be to ensure they get to study job-oriented courses for better employability. Also, getting a better grading from the National Assessment and Accreditation Council is important for the varsity.”

He said he would soon meet the officials of the Jharkhand Public Service Commission (JPSC) as he has learnt that the major problem in Kolhan constituent colleges is the dearth of teachers. “Something has to be done about it soon,” Panda said.

He also said he wanted to start a lecture series named after tribal leaders and would also collaborate with reputa­ble institutes for knowledge-sharing especially in science.