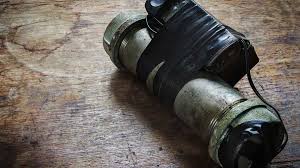 Three children were injured when a crude bomb exploded while they were playing near a ditch at Kendua Macchli Patti area in Dhanbad district of Jharkhand on Monday morning.

Locals claimed that the blast was of such intensity that the walls of the nearby houses shuddered.

Vivek Turi, 13, Dinesh Hadi, 10, and Badal Hadi, 8, who sustained injuries in the blast, were rushed to Pataliputra Medical College and Hospital for treatment where their condition is stated to be stable.

“Locals informed that the children were playing near the ditch. One of them spotted a plastic bag lying in the drain partially hidden by the muck. The children then took out the bag and started playing with it when the bomb exploded,” said Vinod Oraon, OC of Kenduadih police station.

“We are probing the involvement of some criminal elements who might have hid the crude bomb in the drain. We are looking into the incident as it is a crime-prone area. Though the police have not found any other bomb from the site, we are keeping a close vigil in the area,” Minz said.

The area is around 150km from state capital Ranchi.