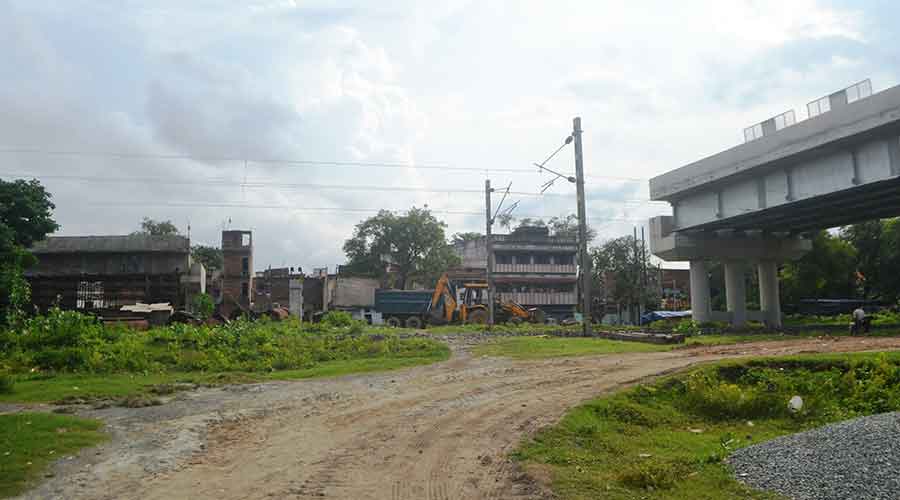 The incomplete railway overbridge in absence of an approach road at Jugsalai.
Animesh Sengupta
Our Bureau   |   Published 23.09.21, 12:34 AM

Jamshedpur: The much-waited Jugsalai Railway overbridge will not be completed before December 2022. Executive engineer, Rides Jamshedpur division, Ram Villash Sahu who is looking after the work of the Jugsalai ROB's approach road said they needed time upto December 2022 for completion of the work as the revised design of the approach road is yet to be approved by the departmental headquarters in Ranchi. "The revised design of the approach road will be approved in maximum a week time. As soon as the new design is approved we will started construction work and complete the work by December 31,2022," said Sahu to The Telegraph Online. Aimed at easing vehicular traffic movement between densely-populated Jugsalai-Bagbera localities and Bistupur, the Jugsalai ROB was planned as a better alternative than the existing level-crossing at Jugsalai. (Kumud Jenamani)

Dhanbad: A B.Tech Mining Machinery student of IIT(ISM), Siddhanth Sharma, earned laurels for the institute, and country by winning 'Innovate 2030-Digital natives for a sustainable future-Challenge' a pan european innovation competition as part of a two-member team along with Sairaju Ponnoju, an M.Sc. Sustainable Production Development Student of KTH Royal Institute of Technology, Sweden. Talking to The Telegraph Online on Wednesday, Sharma said,“Two teams qualified for the final held on September 8 this year during which our team, title Team Mission BSH finally emerged winner.” “We offered a solution for a problem given to our company about retrieving used articles by the company and we created a digital interface where customers as well as company can interact and return back of used and waste products can be ensured to producer,” said Sharma added that in developed countries you just can’t throw away the used articles and their are strict rules for retrieving the waste products. (Praduman Choubey)