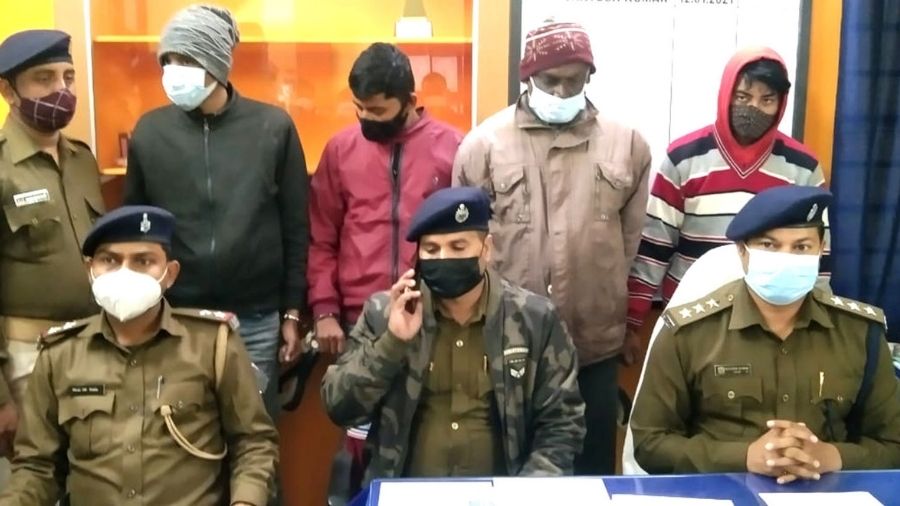 Bokaro: Four criminals, including a father-son duo of Joshi Colony of Chas area, have been arrested by Bokaro police for flashing pistols in broad daylight and also resorting to violence that caused injury to a shopkeeper of Naya More area of Bokaro.

The main accused Harshit Singh, who has criminal antecedents, got engaged in a verbal duel over some trivial issue at Bokaro Naya More based Rajnandani Peda shop. Singh flashed his pistol and resorted to beating the shopkeeper with the help of his aide Rajnandan Singh and other friends.

The arrested persons that included Shailu Singh, father of Harshit Singh also came in support to the main accused and tried to help the Harshit escape from the site.

Giving detail, Kuldip Kumar, Deputy Superintendent of Police of Chas said, “BS City police received the information about some youth resorting to violence yesterday at around 12.30 noon and a team led by officer Santosh Kumar in charge of BS City Police station immediately reached the site. The accused tried to escape from the spot but the police team arrested them after giving chase.

Vishwamohan and  Yuvraj Kumar are the two other persons arrested by police besides the father-son duo Shailu Singh and Harshit Singh.

Dhanbad: More than 600 medical sales representatives of Dhanbad today participated in a day-long nationwide agitation of more than 3 lakh members of the Federation of Medical Representatives Association of India.

The strike was held in support of 16 issues including against round the clock tracking by employers through GPRS devices in violation of laid norms.

The protesters, who staged a massive demonstration at Randhir Verma Chowk of Dhanbad near the district headquarter under the banners of district unit of Bihar- Jharkhand Sales Representative’s Union by symbolically chaining themselves, also raised slogans against the union government's decision to replace the 44 labour laws with four codes which they claimed deprived them of various rights.

The agitators further charged the government to increase the tax on life-saving items like medicines and drugs from 5% to 12% which is affecting the common people in many ways.

Talking to media at the demonstration site at Randhir Verma Chowk during the sidelines of the agitation, Sandeep Aich district president of Bihar Jharkhand Sales Representative’s Union said, “The round the clock tracking of the medical representatives is in violation of laid norms as it can be carried only by the government in the national interest with the prior permission of the court.

“The act of tracking is in violation of the section A of drugs act” said Aich.

Dhanbad: The court of chief judicial magistrate of Dhanbad, Sanjay Kumar Singh rejected the bail petition of Jitendra Sao and Sanjay Sharma the two accused of Wasseypur Muslim youth beating case even as the petitioners claimed that the issue has been settled between the victim and accused out of court.

The bail petition for the duo was moved by senior lawyer Shahnawaz and Narendra Trivedi on behalf of the accused persons who are behind the bars ever since they were arrested on January 8, a day after the incident and the court after hearing the petition which was opposed by Assistant Public Prosecutor, Md Jabbar rejected the bail petition.

Notably Dhanbad police has booked the duo under different sections of Indian Penal Code including 307-related to attempt to murder,  328-related to causing hurt by means of poison etc, section 341-related to  punishment for wrongful restrain and 153 A-related to prompting enmity between different groups on grounds of  religion, race, place of birth, residence etc.

Talking to The Telegraph Online Narendra Trivedi lawyer of arrested persons said, “we are preparing to move the bail petition now in the court of district judge.,”

He further said, "The issue has been settled between the accused persons and victim socially through meetings and we have also presented the victim Zeeshan Khan’s brother Rehan Khan before the court during the hearing yesterday who accepted before the court about settlement of issue.”