When schools finally reopen, many of these children will recover their ability to read and write and also enjoy other aspects of learning and school life: Jean Drèze 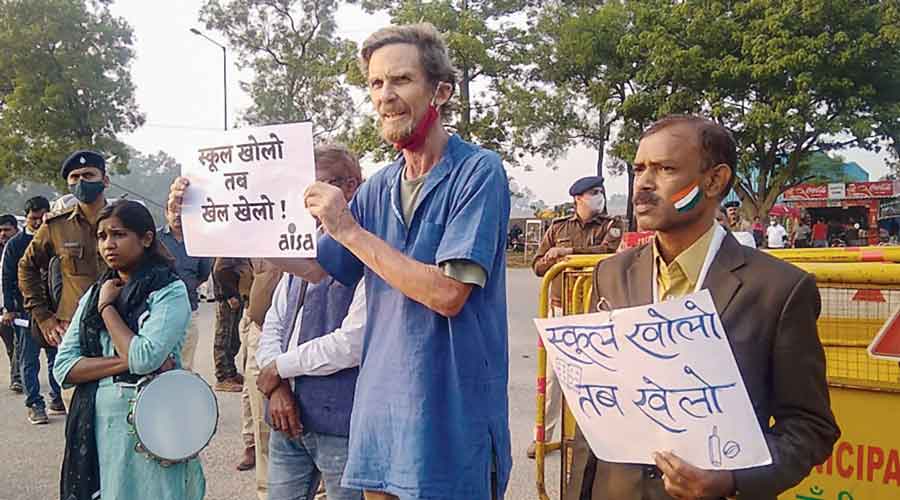 Jean Dreze (centre) during an agitation at Ranchi last year for the opening of primary schools.
Manob Chowdhury
Animesh Bisoee   |   Jamshedpur   |   Published 29.01.22, 01:55 AM

Designed to bridge the knowledge gap created by irregular classes since the first lockdown, the ITK scheme offers two hours of evening lessons to children of Classes I to VIII of government schools, using folk and drama performers as part of the volunteer teaching team. The pilot project was launched in October last year.

Jean, who is also a visiting professor at Ranchi University, in his suggestion given online had penned a letter to the chief minister that states: “Jharkhand has the world record of longest continuous closure of primary schools — almost two years” and points out that the “worst aspect of the crisis is not the economic crisis or even the health crisis, it is the schooling crisis. When the pandemic subsides, the economy is likely to pick up and adults will return relatively soon to their normal lives. But children may pay the price for their entire life.”

The letter mentions that a small minority of privileged children have been able to continue studying online during this period, but online education does not work for poor children. Most of them have been virtually abandoned by the schooling system for two years.

“This prolonged exclusion from the schooling system has led to a revival of mass illiteracy among children. At the time of the 2011 census, the literacy rate in the age group of 8-12 years was close to 90 per cent in Jharkhand. By 2020, most children in that age group must have been literate. But today, when we survey children of that age among poor Adivasi and Dalit families of rural Jharkhand, we find that a majority of them have lost the ability to read a simple sentence. This was one of the findings of the Emergency Report on School Education, released in September 2021,” the letter states.

“When schools finally reopen, many of these children will recover their ability to read and write and also enjoy other aspects of learning and school life. But many will not — they will become de facto dropouts. Remember, children will soon enter classes three grades ahead of the grade they were enrolled in before the crisis. How are they supposed to cope?

“With this background, I feel that Jharkhand needs to plan for a massive literacy campaign for primary-school children in the next two years, in addition to other measures that may be required in this situation. The aim of this campaign should be to ensure that no child in Jharkhand is deprived of a chance to learn to read and write,” Jean suggests in the letter.

Jean, a member of the economic advisory council to the Tamil Nadu chief minister, suggests Jharkhand take inspiration from Tamil Nadu’s “ITK scheme” and states: “If the campaign is based on mobilising local educated youngsters (especially women, Adivasis and Dalits), it could reach every village at relatively low cost, and provide some supplementary income to these youngsters. The support of teachers, of course, is also essential. I appeal to you to consider this proposal and to ensure that an adequate provision for it is made in the forthcoming Budget.”