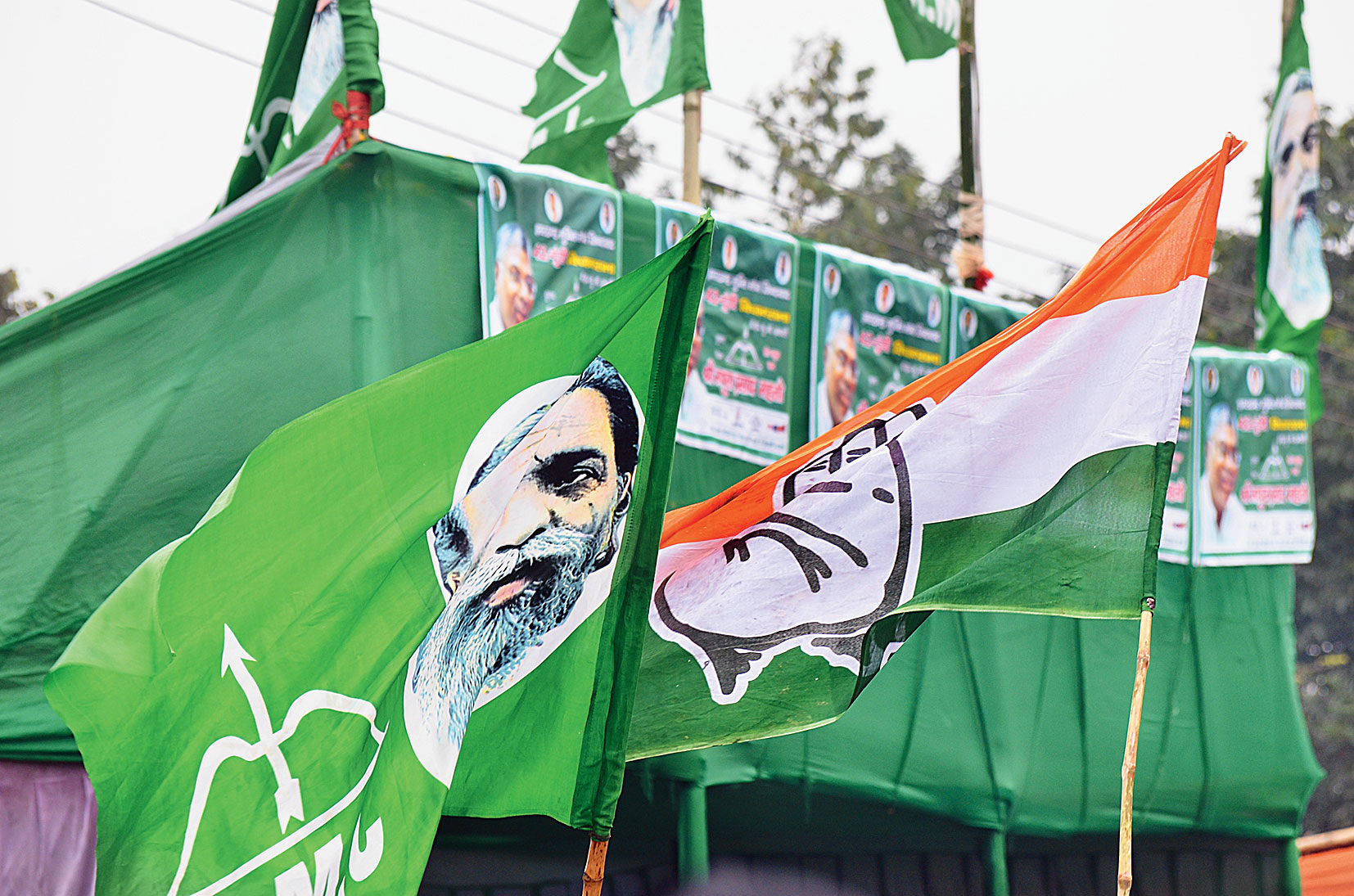 The BJP on Monday suffered a decisive defeat in its Hindutva laboratory of Jharkhand, where voters rejected Prime Minister Narendra Modi’s campaign focus on blockbuster ideology-driven decisions and handed his party a second hiding since the spectacular general election victory.

Jharkhand is the second state after Maharashtra to slip out of the BJP’s grasp since the April-May Lok Sabha triumph, and the fifth since last December when it lost Rajasthan, Madhya Pradesh and Chhattisgarh.

Monday’s blow to the BJP comes amid a nationwide popular upsurge against the Citizenship (Amendment) Act and the National Register of Citizens that began after the first two of the election’s five phases had ended. 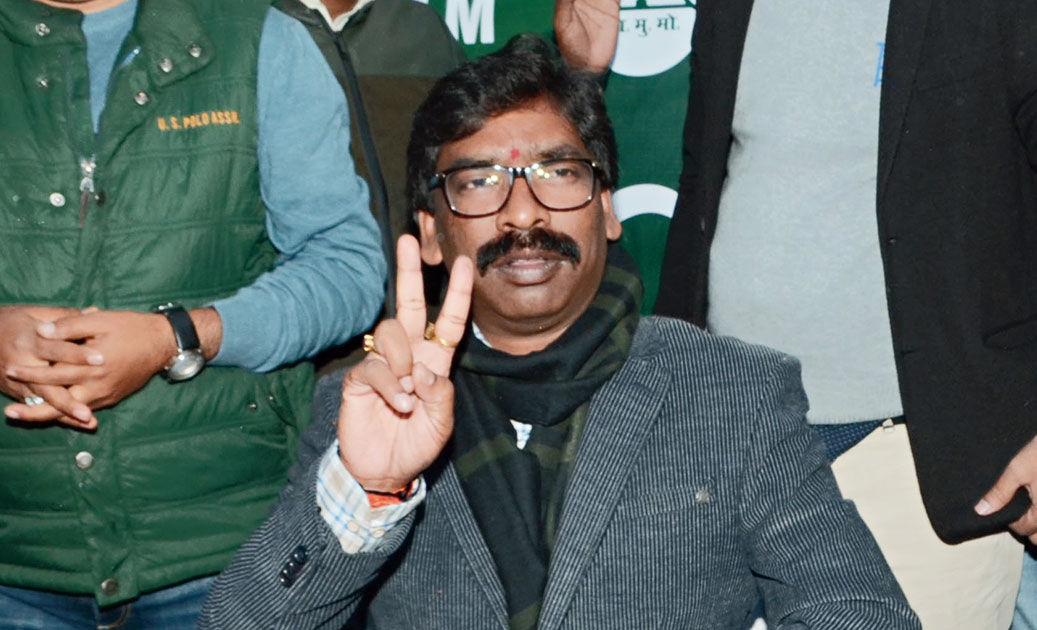 Hemant Soren in Ranchi on Monday.

It’s a setback also for home minister and BJP president Amit Shah, the prime mover behind the citizenship amendment and the NRC.

By 10pm, the BJP’s tally had dropped from 37 (plus six poached from the JVM) in the previous Assembly to 25 (wins and leads) while the JMM-Congress-RJD alliance won or led from 47 seats. The House has 81 seats, with 41 the majority mark.

Hemant Soren, the alliance’s chief ministerial candidate, won the Barhait and Dumka seats, in both of which the Prime Minister had himself campaigned.

Modi had plugged his government’s “56-inch-chest achievements” like the abrogation of Jammu and Kashmir’s special status, the Ram temple verdict, the ban on the triple talaq and the citizenship amendment.

If the strategy was to divert attention from local issues and the complaints over chief minister Das’s failures, the voters refused to be swayed, emphasising a now established pattern of state polls being won and lost over bread-and-butter planks.

The BJP now rules over only 34 per cent of the country’s geographical area, down from 74 per cent in March last year, when it ruled 13 states directly and six others in alliance. Now, the party governs only eight states and shares power in another eight. 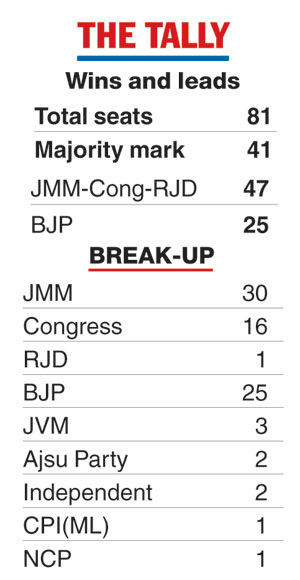 The serial defeats in state polls are a blow to the BJP’s dreams of securing a Lok Sabha-type majority in the Rajya Sabha so it can to push more contentious and ideology-driven legislations through Parliament.

In the April-May general election, the BJP had with its ally Ajsu swept 13 of Jharkhand’s 14 seats.

While Monday’s drubbing may not signify a substantial dip in the Prime Minister’s popularity, it at least shows that the vaunted “Modi magic” cannot overrule local issues in state polls.

A senior BJP poll strategist from Jharkhand told The Telegraph: “Projecting Das as the chief ministerial candidate proved costly. Also, our central and state leaders’ efforts to mobilise people in the name of Kashmir, the Ram temple and the citizenship act didn’t work, with the voters focusing on local issues that directly affected their lives.” 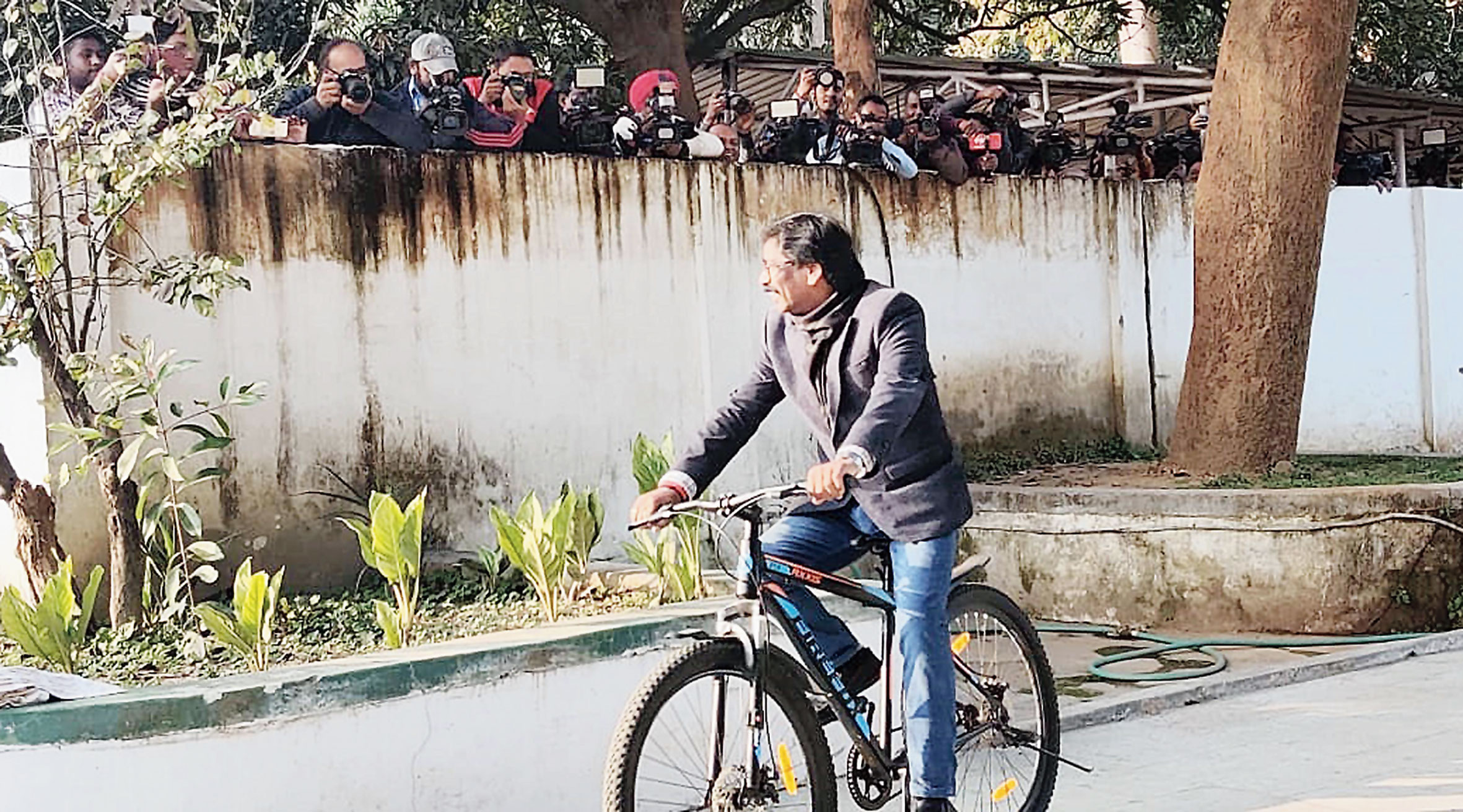 Hemant Soren rides a cycle at his house in Morabadi, Ranchi, on Monday.
Picture by Prashant Mitra

Many in the party, speaking confidentially, blamed the defeat on the sense of “hubris” that had infected the senior leadership after the huge victory in the general election.

“There was a credible case for a change of leadership. We had reports that Das had turned very unpopular but the leadership rejected the demand for a change,” a party leader said.

The Jharkhand defeat marks an ideological setback for the Sangh parivar. The RSS has for years been working in the state, where Christian missionaries have a strong presence, to bring the tribal and backward communities under the wider Hindutva umbrella and has enjoyed considerable success too.

Monday’s results suggest that both the tribal and backward voters have turned against the BJP in significant numbers.

“I thank the people of Jharkhand for having given @BJP4India the opportunity to serve the state for many years.… We will continue serving the state and raising people-centric issues in the times to come,” Modi tweeted.

However, the poll results suggest it was the “people-centric” issues that have stymied the BJP.

During a recent journey through Jharkhand, this correspondent had found the voters talking about jobs, reservation, land rights and farm distress while Modi and Shah continued to bombard them with hype about the NRC, Kashmir, Ram temple, triple talaq and the citizenship amendment.

Das tried to present a brave face and told journalists it was his defeat and not the party’s. He, however, ducked further questions and said the party would look into the reasons for the defeat. Das later submitted his resignation to governor Draupadi Murmu.

Soren thanked the voters and said: “The time has come to fulfil the promises for which Jharkhand was created.”

He was seen enjoying a bicycle ride on the premises of the home of his father Shibu Soren.

The Congress’s Jharkhand minder, R.P.N. Singh, said the details of government formation had not yet been discussed.