Despite the heat, more than 4,000 people, mainly women, came to listen to the actor who arrived over an hour late 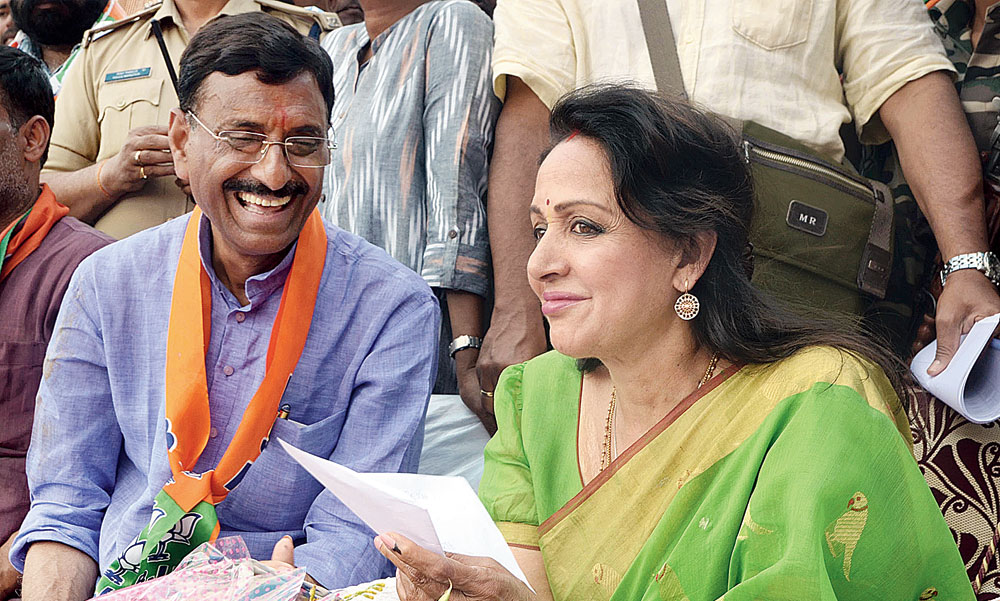 Bollywood actor and BJP leader Hema Malini on Wednesday appealed to the people of Ranchi constituency to come out in large numbers and vote for party’s candidate Sanjay Seth on May 6.

Addressing a rally on Manda Maidan in densely populated Chutia locality here, the Mathura BJP MP urged people to further strengthen the hand of Prime Minister Narendra Modi by voting for the party.

Despite sweltering heat, more than 4,000 people, mainly women, came for faraway places to listen to Hema Malini, who arrived over an hour late.

“I have recently cast my vote in Uttar Pradesh despite extreme temperature. But the weather in Ranchi is quite pleasant and so you must have to cast your vote when polling for Ranchi seat is held on May 6. Ensure that you cast your vote for the BJP candidate to strengthen the party and bring back Narendra Modi with an overwhelming majority,” she said. The actor said she joined the party 15 years ago because she found herself close to ideology of the BJP.

“In 2014, people gave a massive majority to the BJP-led NDA and our government fulfilled the aspirations of the people. Corrupt people and Opposition parties are now living in constant fear. Modi launched hundreds of welfare schemes for the deprived and poor section of society. But the Opposition parties can’t appreciate all these because of obvious reasons,” she said.

The actor added that welfare schemes like Ayushman Bharat and PM Ujjwala Yojana have helped the poor in a lot of ways.

She said the biggest achievement of the Modi government was the way it contained terrorism with its zero tolerance policy.

Hema Malini also addressed an election rally at Kharsawan to bat for party’s Khunti candidate Arjun Munda. She asked the gathering to support Munda as he would serve Kharsawan wholeheartedly. Munda's wife Meera was also present on the occasion.