The leftovers shall be recycled or disposed off in landfills 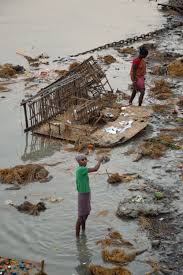 Jharkhand State Pollution Control Board (JSPCB) will depute its officials at popular immersion ghats in major cities to ensure compliance of immersion guidelines and prevent water bodies from getting polluted.

JSPCB member-secretary Rajeev Lochan Bakshi on Thursday told The Telegraph that they had provided guidelines on immersion to the deputy commissioners of all 24 districts and would also depute officials from respective regional offices at ghats to ensure compliance. There are five regional offices of JSPCB in Ranchi, Jamshedpur, Dhanbad, Hazaribagh and Dumka.

“We will also check the pollution levels in water bodies before and after immersion. The objective is to ensure that the guidelines are followed by Durga Puja samitis and civic bodies,” Bakshi added.

The guidelines issued by JSPCB, cites the National Green Tribunal’s (NGT) order on September 4, 2014, and calls for the application of an impermeable synthetic liner on river beds after setting up temporary barricades around the immersion points. The liner should be removed after immersion to take out the remains of idols.

The leftovers can be recycled or disposed of in landfills.

According to JSPCB guidelines, non-biodegradable and organic waste should be removed from the idols before immersion and stored in bins kept near the ghats.

The JSPCB also emphasises on the use of natural colours and clay on idols.

“We have received the guidelines and have started doing work to prevent pollution of water bodies. We will lay a metal mesh-like structure on the bed of water bodies such as Bada Talab, Line Tank Talab and Kanke Dam to prevent the deposit of solid waste after immersion. We have given copies of the JSPCB guidelines to all the Puja committee members,” Manoj Kumar said.

There are over 59 Durga Puja pandals in Ranchi.

“We will be digging up ditches near important immersion points where devotees can put in the Puja paraphernalia instead of throwing them into the river,” Krishna Kumar added.

In Jamshedpur, nearly 320 Durga Puja idols will be immersed in different water bodies across the city.