Tension is simmering at Parasi panchayat in Tamar block of Ranchi ever since word got around that gold deposits lying deep under their homes would now be mined. 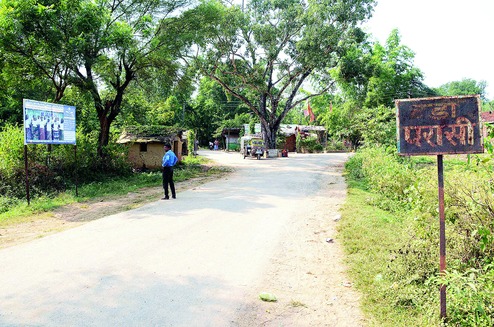 Ranchi: Tension is simmering at Parasi panchayat in Tamar block of Ranchi ever since word got around that gold deposits lying deep under their homes would now be mined.

A nondescript area of hills and lush green fields off NH-33, the village, 50km from capital Ranchi, hit the headlines recently after the state government auctioned Parasi gold block to Runga Mines for around Rs 1200 crore. Mineral Exploration Corporation (MECL) estimates the area to hold 8 million tonne gold reserves and that excavation of a tonne of ore would yield at least one gram of gold.

Nothing has begun on the ground yet, but villagers, led by local tribal leaders, have already made up their minds not to cooperate. They are angry that no one from the government told them about the auction.

Bishnucharan Singh Munda, a middle-aged resident who owns a small tract of farmland in the village, holds out a map of Tamar, accessed from the MECL website, to allege that all of Tamar would be taken over by the company.

"The map shows that not just Parasi, but panchayats like Amlesha, Ulidih, Tamar, Kundula, Kurkutta, among others, will come under the mines area slowly. Entire Tamar will be erased slowly from the map," claimed president of Adivasi Jan Parishad Prem Singh Munda.

Prem wondered where the displaced would be accommodated. "What will be the amount of compensation? Will that money be enough? We have so many questions, but there are no answers," he said.

But state mines commissioner Abu Bakr Siddique said they had no reason to harbour such apprehensions at such an early stage.

"The auction clause mentions that land cannot be taken without the consent of gram sabhas. The company will have to first submit 10 per cent of the auction amount within 30 days. Then we will issue letter of intent," he told The Telegraph, adding that they would then study the company's mining plan while environmental clearances were obtained.

"Only after this comes the question of land acquisition," Siddique said.

But the villagers are far from convinced. Panchparagana Jameen Bachchao Morcha, a newly-formed outfit, has planned a jan sabha on November 20 at Parasai Lungtun village.

"We are mobilising people. All gram sabhas will pass resolutions against it. People will be told how the government is silently working to divert agricultural land of tribals for mining," said Laxman Singh Munda, a key functionary, adding that they would submit a memorandum to Governor Droupadi Murmu on December 5.