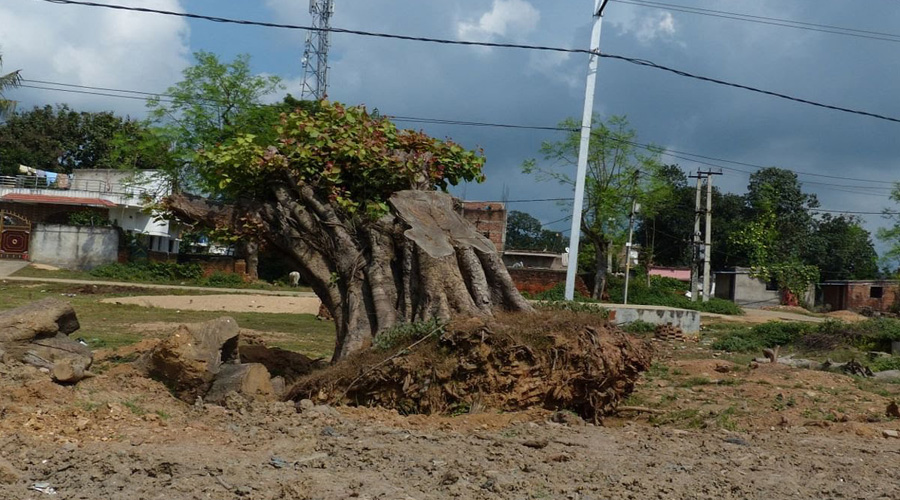 A peepal tree uprooted in Jhumri in Koderma for the widening of Barhi (Hazaribagh)-Koderma four-lane project, have to be replanted again. The transplant order came after the tree showed signs of life with new leaves. After felling, this tree was kept on the roadside and as new leaves came, well-known environmentalist of the area, Indrajeet Samanta drew the attention of the forest department officials to this development demanding transplantation of it.

Due to Samanta, the forest department had issued an instruction to the National Highways Authority of India (NHAI) asking them to transplant the tree soon.

In the state, several thousand trees are axed for road widening project forced Samanta to file a PIL in the Jharkhand High Court in this regard. Due to the court's order, the forest department had constituted a high power committee to take immediate decisions on such issues. In the Barhi-Koderma four-lane project, out of 3518 trees, this committee asked to transplant 1727 trees.

About this peepal tree, it was axed down near Jhumri village making Samanta send an email to the forest department on November 8 telling that this tree looks healthy and despite the fact that it was uprooted and kept roadside, new leaves are coming.

On November 10, officials passed instructions to NHAI to transplant this tree to save it. NHAI sources said all processes are completed and the tree will be transplanted soon.

Divisional forest officer of Koderma, Suraj Kumar Singh said on the initiative of Samanta, this instruction was passed to save the peepal tree through immediate transplantation. He urged others also to remain alert on environmental issues.

The 27.5 km long Barhi-Koderma project is to be constructed from Rs 276 crore on which work has already started. The construction company that got the contract was given the deadline of August 2021. Company officials said it was not possible to complete the work within the given deadline as there was trouble in land acquisition of 17 km stretch due to villagers protest.