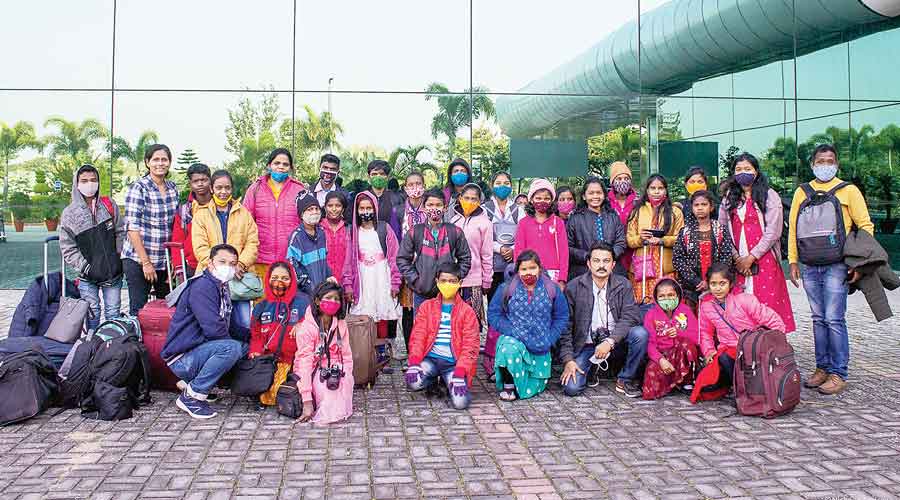 Nearly 25 children from Odisha and five from Jharkhand experienced the joy of boarding an aeroplane on Wednesday for the first time in their life as they took a flight to New Delhi.

As many as 29 children from the Thousand Schools Programme and one from Masti ki Pathshala — both under Tata Steel Foundation — boarded the Air Asia flight from Birsa Munda Airport in Ranchi. Besides the flying experience, the 30 students will be attending as well as participating in a painting exhibition at the embassy of Finland in New Delhi, between December 2 and December 4.

The five tribal children from Jharkhand are from Jagannathpur and Noamundi blocks in West Singhbhum and from Jamshedpur in the East Singhbhum district.

TSF’s education initiative apart from ‘Masti ki Pathshala’ include the ‘Thousand Schools Programme’ that operate in Odisha and Jharkhand reaching out to 5 lakh students and aiming to bring back children to school through strengthening the education and monitoring systems.

“As many as 50 paintings done by children from the Education Signature Programme will be exhibited at the embassy. In addition, the children will also get to enhance their artistic skills at mural painting sessions during this time. These apart, they will also experience the capital city through sightseeing and the charm of watching a film in a multiplex,” said a Tata Steel spokesperson.

The team will fly back to Ranchi on December 5.

“To enrich the programme in terms of its quantum and quality, collaborations and partnerships with the organisations in the field of education at a national and international level are being taken up. There have been two visits of senior members from the embassy of Finland earlier and during discussions on how to imbibe the principles of the Finnish education system into the Education Signature Programme — which emanates from the Thousand Schools Programme, run by the Tata Steel Foundation in association with ASPIRE, an NGO on education in India,” added the spokesperson.

As a goodwill gesture, Air Asia is providing the tickets at a 75 per cent discounted rate.

“This venture is key to looking aspirations and curiosity which lies in both seeing new things and overcoming the fear of the unknown and is being very lovingly organised by ASPIRE, Air Asia, the embassy of Finland and Tata Steel Foundation. I convey our heartfelt thanks to each and every parent for the trust that they have reposed in us in creating this space for their children,” said Tata Steel chief corporate social responsibility Sourav Roy.

As a part of the association, this journey has been planned as an attempt to develop transversal skills in the rural children by providing exposure to national heritages, urban scenarios that exhibit diverse cultures and a completely different scenario from rural inhibitions these children come from.