Will continue to be at forefront of fight against Centre’s anti-labour policies, says Congress leader 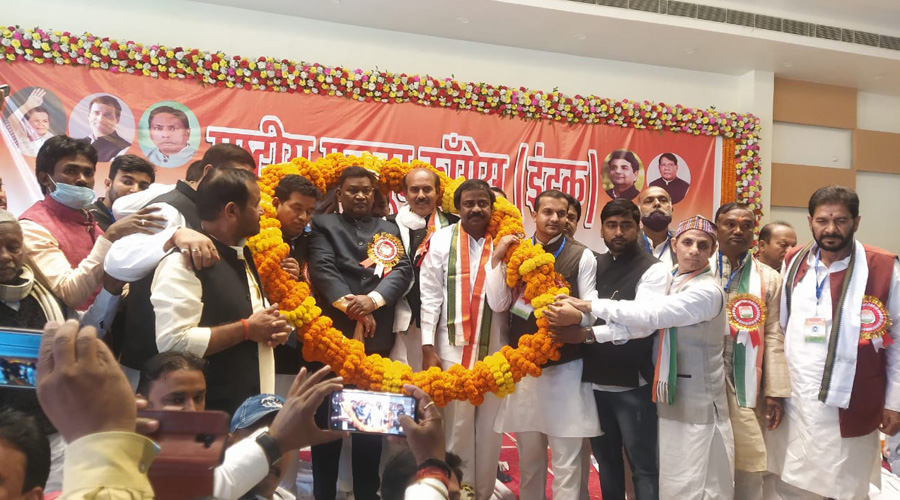 K.N. Tripathy (second from right) after being elected national president of Intuc at its AGM in Ranchi on Thursday.
Telegraph picture
Our Correspondent   |   Ranchi   |   Published 17.12.20, 06:27 PM

Speaking to reporters after the formal announcement, Tripathy said Intuc, the trade union wing of the Congress founded in May 1947, would continue to fight against the anti-labour policies of the Union government.

“The country is passing through a difficult phase at the moment whereas farmers, labourers, and marginalised are forced to take to streets to safeguard their livelihood and rights because of wrong policies of the Union government. Intuc as a national body of a large workforce in the country will be at the forefront of this fight for the cause of our people,” he said.

Reacting to the ongoing farmers’ stir against the Centre’s new laws on agriculture, which entered its 22nd day on the borders of Delhi, Tripathy said the magnitude of agitation is a testimony of the Union government’s wrong intention. “Will any sane person protest unnecessarily, fighting the extreme cold and risking lives amid the ongoing global pandemic? The government must understand that the country’s food growers have lost their patience this time,” he said.

Tripathy said the Industrial Relations Code, which was passed by Parliament in September, was another example of how the Union government worked arbitrarily to favour corporate friends. The code was, reportedly, brought to replace three previous laws — the Trade Unions Act, 1926, the Industrial Employment (Standing Orders) Act, 1946, and the Industrial Disputes Act, 1947.

“Before enacting the law, the government never took suggestions and viewpoints of stakeholders, mainly workers’ unions or the state. It (the code) is highly tilted towards industries.”

Citing a few resolutions that were passed during the two-day-long Intuc AGM  in Ranchi, Tripathy said, “Intuc has passed a resolution calling for Rs 25,000 as the minimum salary for contract workers, rejecting 100 per cent FDI, and  demanding minimum support price for agricultural produce, pension for  unorganized workers, among others.”