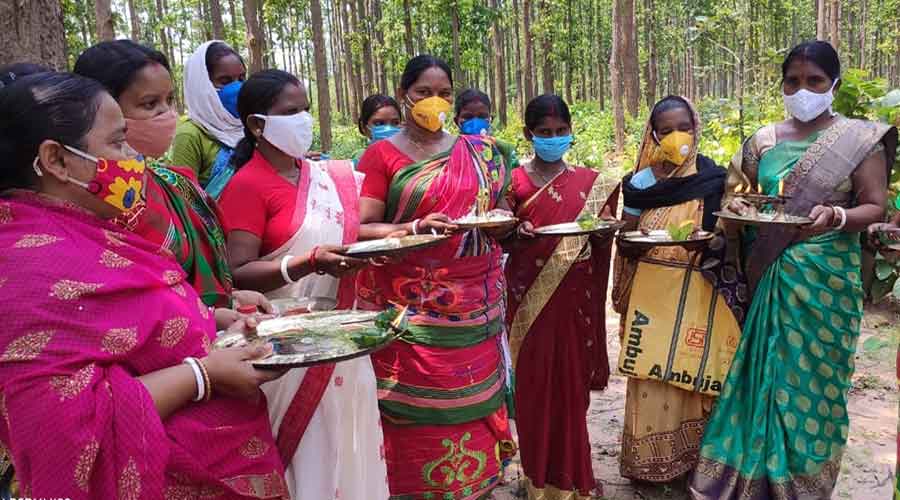 Environmentalist Jamuna Tudu and her team will tie rakhis to over 100 trees at Sunsunia jungles in Chalulia block of East Singhbhum on Raksha Bandhan.

The members of Van Suraksha Samiti (VSS), which is led by Jamuna, will shortly make rakhis at their homes while some would be bought from the market in Chakulia, around 90m km from Jamshedpur.
"We tie rakhi to trees every year. But this Raksha Bandhan we have a target to cross the 100 mark. We tie rakhis to the trees for their well being. It also sends a message about the importance of protecting the environment,"Jamuna, a Padma Shri awardee said over phone from her village Maturkham.

She added they would adopt the required Covid-19 protocols while celebrating Raksha Bandhan. All members will wear masks and maintain social distancing. "Long strings will be used for tying rakhis to trees. Generally we tie rakhis to around 65-70 trees but this time it is going to be different," the feisty tribal promised.

According to her, they will also invite guests on the occasion and take pledge to continue protecting the jungles with more vigour and determination. "Some of VSS members would also speak about the environment and the need to protect it. Raksha Bandhan is an occasion we look forward to," the green crusader said.

Formed in 1998, the Samiti is currently limited to East Singhbhum. It has over 300 women members in the district, including Bahragora, Ghatshila, Potka, Patamda and Dhalbhumgarh. VSS committees have also been formed in Dumka, Giridih, Godda and Pakur.

Known as Lady Tarzan for the ferocity with which she fights the timber mafia, Jamuna added she feels immensely happy to see tree felling come down. "However, we would not sit down and continue to fight the timber mafia. Laxity on our part would not help the cause for which we are fighting," she pointed out.

Born in Odisha, Jamuna settled in Muturkham after marriage. Surrounded by 50 hectares of forest land, Muturkham was plagued by the forest mafia and poachers before she decided to take the matter in her hands.

The Samiti has intensified daily patrolling in  Beladih, Madhupur, Laubera, Dhalukdingha, Baraghat and Muhulbera forests. The members patrol the forest on rotation from early morning to late evening.