JMM will take decision on support this week 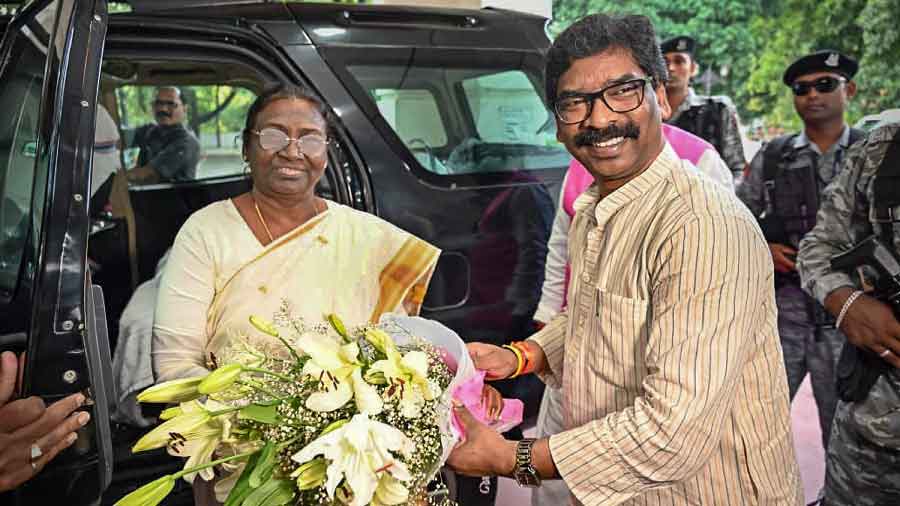 NDA's presidential candidate Droupadi Murmu visited Jharkhand on Monday and sought the support of ruling Jharkhand Mukti Morcha, a tribal party, besides BJP legislators and parliamentarians in the state for her election to the country's topmost office.

She met JMM president Shibu Soren, its executive president and Chief Minister Hemant Soren besides the NDA legislators and parliamentarians in the state.

The JMM, which is yet to announce its stand on its support to a candidate during the July 18 presidential polls, will take the decision this week, a JMM spokesperson said. Chief Minister Hemant Soren extended a warm welcome to Murmu, who is a former governor of the state, on her arrival. She was accompanied by union ministers Arjun Munda, Annapurna Devi and Arjun Meghwal, besides BJP state president Deepak Prakash, JMM said in a statement.

"A warm welcome is extended to her (Murmu) on her arrival to the holy land of Bhagwan Birsa. Many wishes from our side to respected Droupadi Ji," said Soren in a tweet.

Murmu and Soren are both tribal leaders and belong to the Santhal ethnic group, which has a sizeable population in Jharkhand as well as in Odisha, from where she hails.

Murmu had earlier called up Soren to seek JMM's support for the polls.

Senior JMM leader Lobin Hembrom said Hemant Soren has been authorised by JMM to talk to the Centre and take the "appropriate decision" on the party's stand on supporting the presidential candidate. "He (Soren) met Union Home Minister Amit Shah recently and we will declare our decision very soon." Soren had met Shah and other NDA leaders in Delhi on June 27 and is learnt to have told them that the party will soon take a call on whom to support in presidential polls. The meetings were held amidst intense speculation over whether JMM will back Murmu or the Opposition's joint nominee Yashwant Sinha, who is a son of the soil of Jharkhand.

Murmu and Sinha are the only two left in the race for the president's office after the last day for the withdrawal of nomination ended on Saturday.

Several regional parties like the BJD, BSP and SAD have extended their support to Murmu. The numbers are stacked in favour of her who is expected to win the polls comfortably.