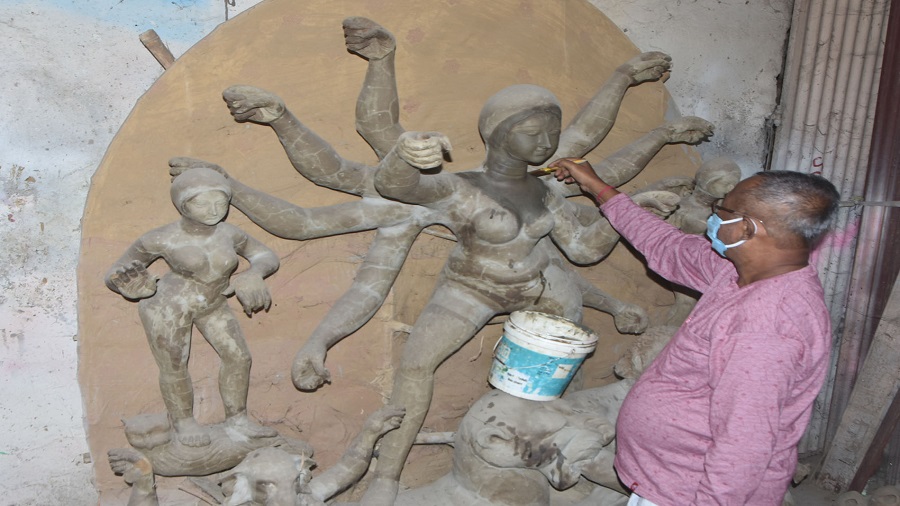 Coal town artists and sculptors have had less than 10% of the usual business this year due to the Covid pandemic and lockdown. Worse is the situation of families who are traditionally engaged in idol making for several generations, their sole source of sustenance.

Talking to The Telegraph Online, Abhishek alias Sonu Paul (36) son of renowned Dhanbad sculptor Dulal Paul said they used to get at least 50-55 orders during Durga Puja, but received only ten this year.

“Apart from Dhanbad, we would get orders from Biharsarif, Koderma and China Kori in Asansol and a majority of our idols would range from eight feet to 15 feet. They were worth Rs 1,800 to Rs 20,000, but this year we received orders for 4-5 feet idols worth around Rs 8000 to 10000,” said Paul, adding that he cannot pay the five workers from Bengal with this year’s income.

“All 15 of our Ganesha idols remained unsold this year, incurring huge losses for us. So far, we have received only five orders for Vishwakarma Puja scheduled on September 17, much lesser than usual order of over 20 idols last year,” he said.

The Vishwakarma idols Paul’s team is making this year range from one to two feet instead of the usual height of five to six feet.

Work began in February this time, like every year.

13 artists from Nabadwip and Burdwan in Bengal started working with Paul, for which they were paid a minimum salary Rs 10000 per month.

“All the artists got stuck here during the lockdown and we had a difficult time paying their salaries for five months with almost zero income,” he said and added they eventually hired cars and sent eight of them home.

However, five are still at the workshop situated on the ground floor of a house for, making Durga idols.

“The state government should provide some relief as they did in Bengal. The artists stuck at their respective workplaces were sent home by the government itself,” said Paul, adding that their financial condition is making it difficult to pay their children’s school fees.

“My younger brother Abhijeet Paul (31) is a hotel management degree holder and used to work outside but he joined the traditional profession due to our suggestion. We are now repenting for our decision. Had he been in a job he would have at least earned something,” he said.

Swapan Paul (67), another artist of  Luby Circular Road of Dhanbad, said, “We also used to make 20 Durga idols every year but this year received only five orders so far.”

They had also engaged five artists from Bengal who have remained at their place for more than eight months.

Paying their salaries is difficult at the time when they are facing difficulty in trying to sustain themselves.