Police seized arms and ammunitions, including two pistols, eight bombs and six catridges from those arrested 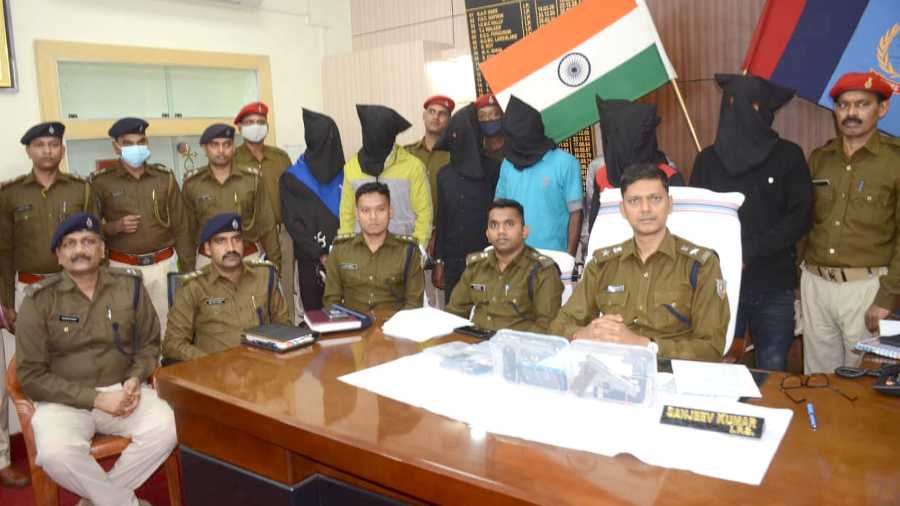 Dhanbad police today arrested seven persons, including two shooters in connection with the murder of realtor Mahtab Alam Alias Nanhe Khan of Wasseypur and recovered arms and ammunitions, including two pistols, eight bombs and six catridges from them.

The police also seized eight mobile phones and one motorcycle from the arrested persons.

Talking to the media, Sanjeev Kumar, Dhanbad Senior Superintendent of Police said, “We have earlier arrested three persons on November 25 in this case and today arrested seven persons including the two shooters Anwar alias Rahmat and Dickey Ansari who opened fire on realtor on November 24 while the remaining accused were engaged in carrying out recce of the victim.”

“With the latest arrests the total number of arrested persons increased to 10 and those arrested today were trying to create an atmosphere of terror after the murder,” added Kumar.

“We constituted a high level team under the leadership of Additional Superintendent of Police, Manoj Swargiyari immediately after the incident under which six sub teams were also working, carrying out raids against the possible hideouts of the criminals,” elaborated Kumar, adding that some more people have also been identified in connection with the murder. The police have collected some vital evidence against them.

When asked about the whereabouts of the main accused Prince Khan who is allegedly the kingpin of the gang, he said, “Our teams are continuously keeping track of the situation, based on inputs and we would also ensure that strict punishment is meted out to those involved in the ghastly murder."

The arrest took place during the wee hours of today at around 4 am after a raid was conducted at officers colony of Wasseypur where the farm house of Prince Khan is located.

Mahtab Alam alias Nanhe Khan was shot dead on November 24 at around 4 pm by some bike-borne criminals in Alipur street of Wasseypur while he was heading home on his bike.