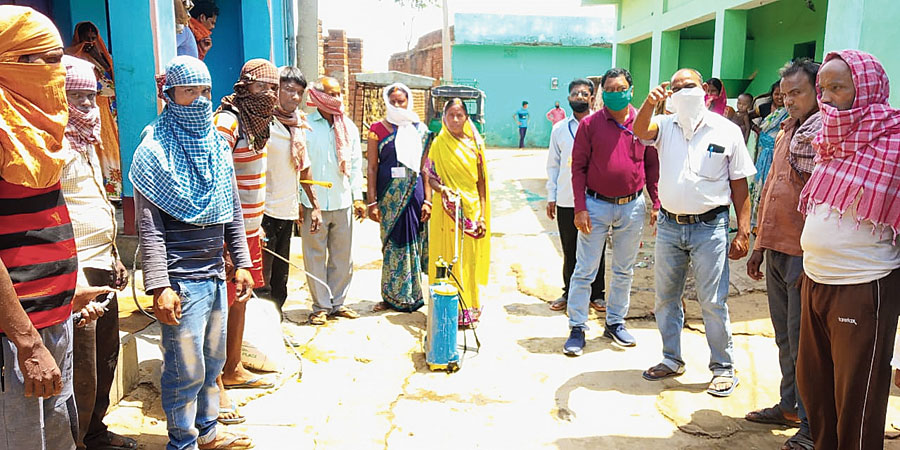 The second Covid-19 patient of the district, currently under treatment at the HZB Arogyam Multispeciality Hospital, had travelled in a packed train compartment and then boarded two mini trucks to reach his village in Vishnugarh on March 23.

Health department officials said the 35-year-old man had been a driver of a heavy vehicle for a construction company in Mumbai.

When the news of people getting affected by coronavirus started to break, the company stopped operations, denied the man his three-months salary, and warned him against coming to work.

The man, who was living in a rented room at Vadkhal in Mumbai along with 20 other labourers, was left with no alternative but to head back home.

On May 21, he boarded Jharkhand Express from Tilak Nagar Station and got down at Hazaribagh Road Station in Saria (Giridih) on the morning of March 23.

From there, he boarded a mini truck that had eight passengers already. The three-wheeler dropped him at Bagodar from where he took another mini truck to reach Vishnugarh Chowk in Hazaribagh. There, a man from his village and his two daughters gave the 35-year-old a lift in their car.

After spending two days at home, he went to the primary health centre at Vishnugarh on March 25 with high fever. He was prescribed medicines and sent back home.

The patient told officials that he used to follow his normal routine of sitting outside his house and talking to neighbours till April 5 when he started vomiting.

On April 6, he visited the primary health centre again where Dr Arun Kumar Singh sent him in quarantine.

The next day, he was sent to Hazaribagh Medical College and Hospital where he was kept in isolation and his sample sent for test to Ranchi.

On Saturday, his reports confirmed coronavirus.

A team from health department on Sunday sanitised the containment and buffer zone in Vishnugarh village.

“The villagers are being screened for any flu-like symptoms. I urge the people to not take the lockdown lightly and follow the social-distancing guidelines strictly,” Hazaribagh deputy (DC) commissioner Bhuvnesh Pratap Singh said.