January 31 procession to begin in Godda and end in Deoghar 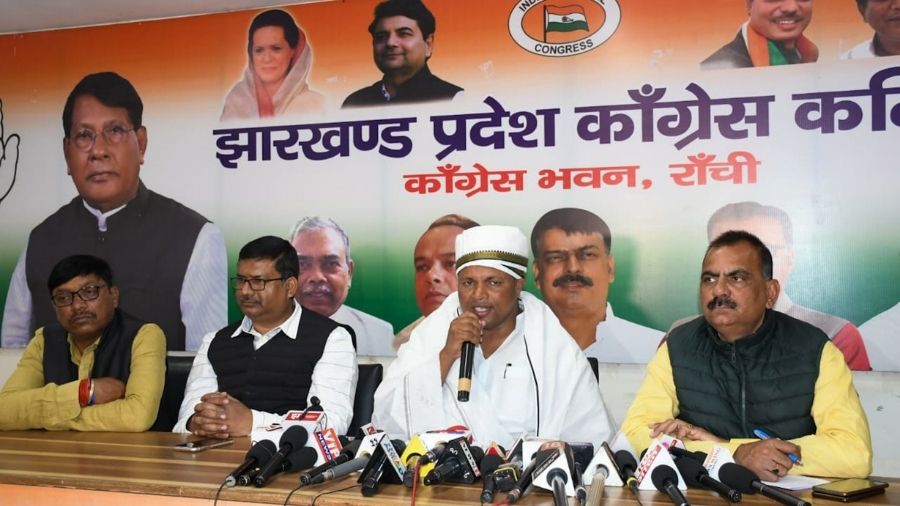 State agriculture minister Badal Patralekh, along with other Congress leaders, addresses the press to announce the party’s January 31 tractor rally in Ranchi on Thursday.
Picture by Manob Chowdhary
Our Correspondent   |   Ranchi   |   Published 28.01.21, 09:05 PM

Congress, which is part of the ruling alliance in Jharkhand, announced on Thursday that it will hold a tractor rally in Santhal Parganas on January 31 in a show of solidarity with protesting farmers in Delhi who are demanding the repeal of three contentious farm laws.

Addressing a press conference at the party office here, senior leader and state agriculture minister Badal Patralekh said, “The tractor rally on January 31 will begin from Godda district’s Kargil chowk and will end in Rohini in Deoghar district.

“We are calling it ‘Hul tractor rally’ as this event will mark the farmers uprising against the Union government’s autocratic way of functioning in favour of its capitalist friends. Hul rebellion in Santhal Parganas has a historic significance in India’s freedom struggle as it marked the tribal uprising against the British regime then.”

State Congress president Rameshwar Oraon will flag off the rally which will cover a distance of about 80km. “Farmers across 24 districts will attend the rally, besides all MLAs of the party, and functionaries. This will be a peaceful rally,” he said.

Patralekh called for a judicial inquiry into the Republic Day violence in Delhi during the farmers’ tractor rally, claiming that it was orchestrated by certain groups to defame the peaceful protest of farmer groups for the last two months.

“Farmers have laid down their lives during the agitation in Delhi, facing extreme cold and other vagaries of the weather amid the Covid-19 pandemic. But they never resorted to violence. Even on Republic Day, they took out a peaceful tractor rally, but certain sections resorted to violence as part of a well calculated move to defame the stir,” he said.

Also, Patralekh asked, how was it that the Union home ministry did not have any intelligence about the possibility of violence. “How come rogue elements managed to sneak in through the security apparatus to scale Red Fort?” he said.