Three others set up, two at Sahid Nirmal Mahto medical college and another at Sadar Hospital of Dhanbad 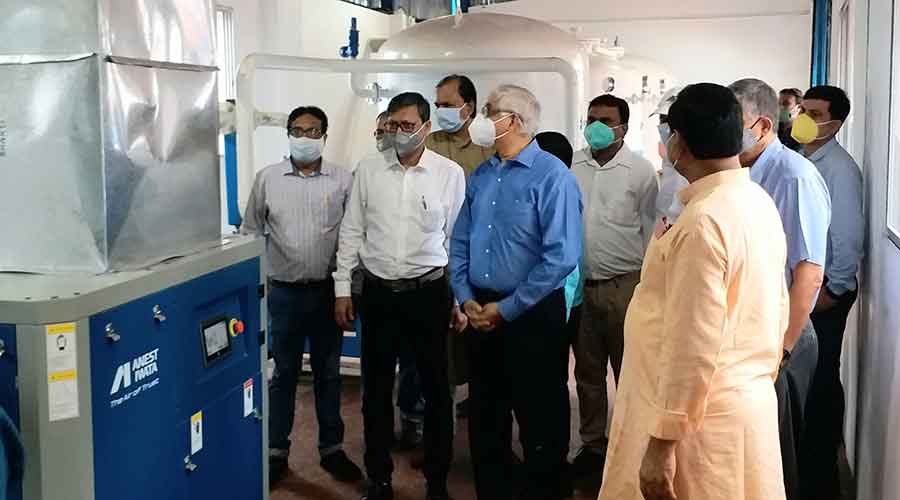 The first Pressure Swing Adsorption Oxygen plant of coal town established by Jharia Division of Tata Steel, since the outbreak of the Covid pandemic in March last year was commissioned on Wednesday at its Central Hospital at Jamadoba in Jharia.

Set up over an area of 400 square feet in the hospital by Tata Steel Foundation, the PSA Oxygen plant of 833 litres per minute capacity launched in presence of Chanakya Chaudhary, Vice President (Corporate Services) as chief guest will not only make Tata Central Hospital fully sufficient in medical oxygen supply at the hospital but will also enhance the medical facility by providing continuous oxygen support to 15 beds (five ICU beds and 10 beds of Covid 19 ward) inside the hospital.

Dr Alok, Chief Medical Officer of Jharia Division of Tata Steel was also present during the occasion along  with Dr Sudhir Rai, General Manager (medical services) of Tata Steel; Dr Rajan Chaudhary, advisor (medical services)  Tata Steel; Saurav Roy, Chief (Corporate Social Responsibility) and Sanjay Rajoria, General Manager (Jharia Division) of Tata Steel said that besides the PSA Oxygen Plant, Oxygen Manifolds and storage area for keeping filled and empty oxygen cylinder have also been developed at the Tata Central Hospital at Jamadoba.
Chanakya Chaudhary, on the other hand said that the plant has been established as part of the effort of Tata Steel to combat Covid-19 and be future ready.

The trail of all the three newly established PSA Oxygen plants, including two of SNMMCH and one of Sadar Hospital for which gas pipeline has already been laid and has also been completed during August end and is awaiting it’s formal inauguration which is likely to carried out online by Chief Minister Hemant Soren from Ranchi.