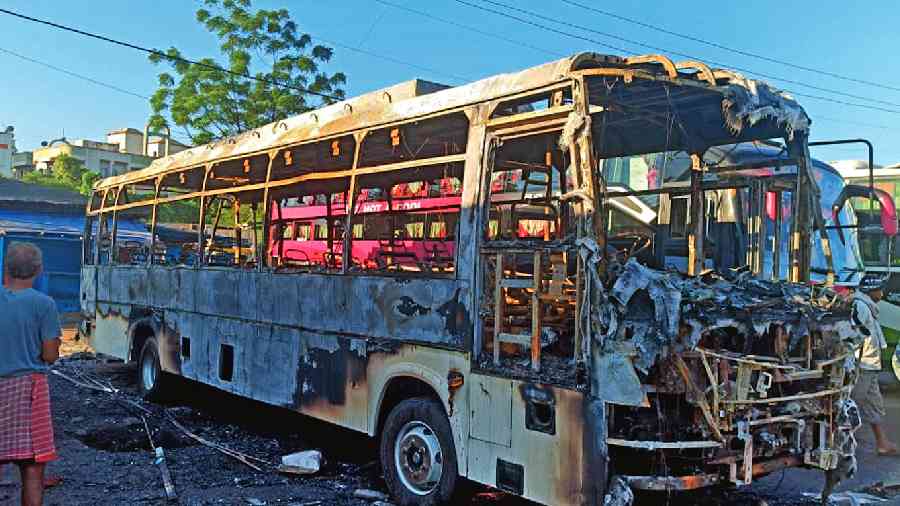 Four persons, including two minors, were charred to death in separate incidents of freak fire mishaps on the Diwali night (Monday) in different parts of Jharkhand.

Two staff members of a private bus were charred to death after a fire broke out in the parked bus on Monday late night (around 1am) at Khadgarha inter-state bus terminus under Lower Bazar thana area of Ranchi.

Though police said they are investigating the cause of the fire, prima facie they suspect it to be caused by burning candles inside the bus.

The deceased were identified as Madan Mahto, 50, the driver of the bus, and Mohammed Ibrahim, 25, the helper.

“The incident took place around midnight when the driver and the helper were sleeping in the bus. It seems that they lit candles on the dashboard of the bus for Diwali. It is suspected that they might have been under the influence of alcohol, due to which they could not sense the initial burning heat. Due to Diwali there were less buses at the terminus and very few people,” said Vikas Aryan, a police officer posted at the outpost near the bus terminus.

By the time the fire brigade was informed, the bus was gutted, he said.

The bodies were sent for post-mortem to Rajendra Institute of Medical Sciences (RIMS).

In another bizarre incident, a three-month-old girl child was charred to death, after a fire broke out in a hut in Jharkhand’s Dumka district on Monday night.

The incident occurred at Palasi village under Shikaripara thana areas when the child was alone inside the hut.

According to reports, Umesh Lal Mahto, a resident of Palasi village, was married to Hiramuni Soren of Asna village three years ago. Due to poverty, these people were living in a hut in the open ground just some distance from the middle school Asana. On Monday, Umesh Lal Mahto had gone out for work. His wife Hiramuni Soren, after preparing the food, put the girl to sleep inside the hut and went to the school tubewell to fetch water after dousing the wooden hearth with water. However, the fire of the hearth was not completely extinguished and the hut was set on fire by a spark due to strong wind. As there was no house around nobody could rush to douse the flames. It was only when flames started leaping that the mother and the other villagers noticed the fire and rushed to douse the flames. But by then the infant was charred.

“It appears that the blaze was caused by a spark from a stove. The infant succumbed to burn injuries,” Dumka Sub-Divisional Police Officer Noor Mustafa Ansari

In another incident, 11-year old son of Kashi Chaudhary, resident of Gurha Mallah Toli of Rehla police station area in Palamau district, was badly injured while bursting crackers with friends on Monday evening.

The relatives first took him to nearby Garhwa Sadar Hospital for treatment from where the doctors seeing the critical condition referred him to Palamau Medical College and Hospital where the child died later on Monday night during treatment.