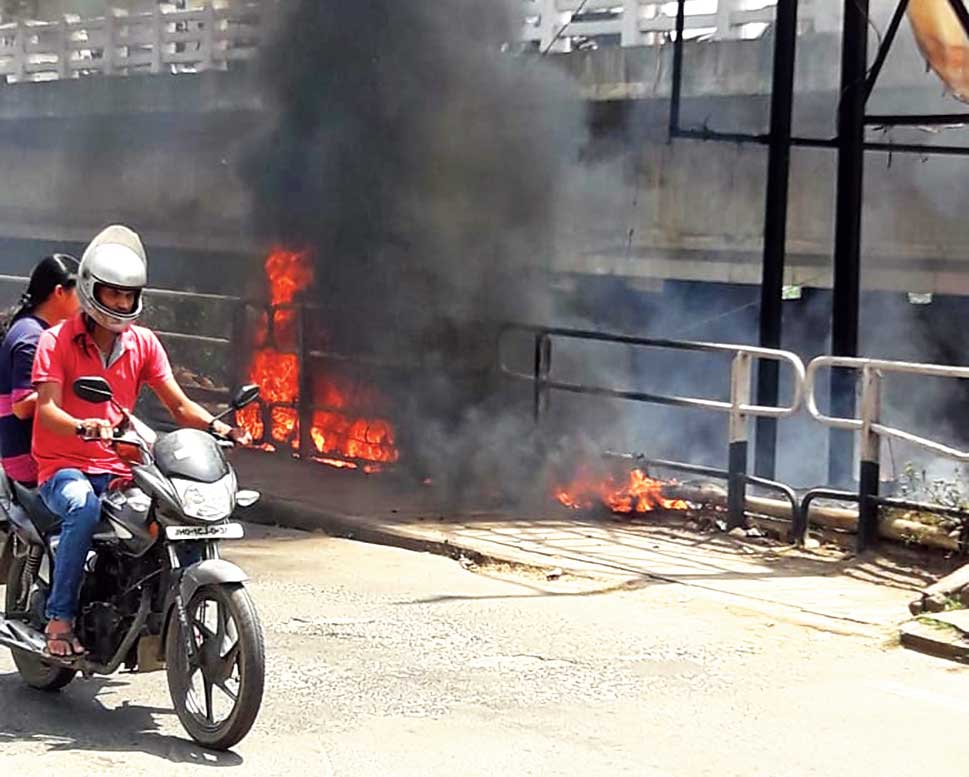 The fire on Kharkai bridge sends billows of black smoke into the air in Jamshedpur on Saturday.
(Bhola Prasad)
Our Correspondent   |   Jamshedpur   |   Published 06.04.19, 06:43 PM

Electricity and optical fibre cables passing through Kharkai bridge were damaged in a fire here on Saturday morning, disrupting power and landline telephone services in Adityapur.

Sources said the cables caught fire after burning signboard flexes were dumped on the bridge, which links Bistupur in steel city to Adityapur in adjoining Seraikela-Kharsawan district.

As a result of the blaze, which took place at 11.30am, power supply was affected in many residential areas and industrial units in Adityapur for around an hour.

Landline telephone services, too, were hit due to the blaze, which was doused at 12.30pm. The damage was estimated to be worth around Rs 4 lakh.

While the power line belonged to Jusco, the optical fibre cables (OFC) were owned by BSNL and a few private service providers.

This was the second time that cables passing through Kharkai bridge caught fire in the past two years.

“Though power cables passing through Kharkai bridge were burnt out, the damage was not much. However, OFCs were affected extensively,” Jusco spokesman Rajesh Rajan said.

He said they were able to douse the flames using fire extinguishers within 15 minutes of the fire being reported. ”Power supply to residential areas and industrial units in Adityapur was restored by 12.30pm,” said Rajan.

“Scrapped signboard flexes which were lying near the bridge were set on fire by rag pickers. The blaze spread from there and the cables caught fire,” Rajan added.

“We are trying to replace the damaged OFCs. Landlines will be up and running by Sunday morning,” a senior BSNL official said.

About 40 per cent domestic consumers and 60 per cent industrial consumers use Jusco power in Adityapur and Gamharia.

Adityapur Colony resident Ajeet Singh said they were without power for over an hour.

“We did not know the reason behind the sudden power cut. Jusco generally gives a notice before resorting to power cuts. I called up the utility company and came to know about the cable fire,” he told The Telegraph.