Second district after Ranchi to earn the tag in state 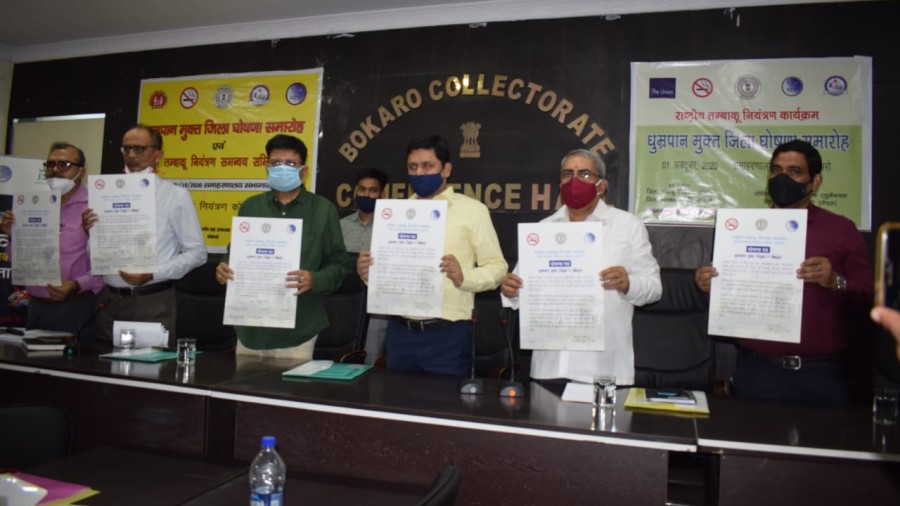 Bokaro was on Thursday declared the second smoke-free district in Jharkhand after Ranchi.

Bokaro achieved the smoke-free tag following a survey by the government in compliance with various sections of the Cigarettes and Other Tobacco Products Act, 2003 (Cotpa 2003). The survey was conducted in all the 24 districts of the state.

A declaration was signed by the senior administrative officials of the district at a meeting of the District Tobacco Control Coordination Committee (DTCCC) held at the Collectorate Hall. Deputy commissioner, Bokaro, Rajesh Singh appealed to the residents to keep the entire district smoke- and tobacco-free.

Under the existing tobacco control programme, surveys are conducted from time to time to assess the status of compliance with various sections of Cotpa 2003, including Section 4 (ban on smoking in public places). Based on the compliance report, districts are declared smoke-free. In this sequence, Ranchi on Wednesday was declared the first smoke-free district in the state.

Mishra said that “on the basis of the survey, we have found that Bokaro has complied 93.5% with Section 4 of Cotpa 2003, which is better than most other districts”.

Civil surgeon Dr A.K. Pathak said the campaign to make Bokaro a smoke-free district has been on since 2016-17. Today, after almost four years, the district has got the distinction of being smoke-free.

The deputy commissioner appealed to all the residents to help keep the district smoke-free and keep the town completely free of tobacco. Future generations can be protected from the ill effects of tobacco, he said. He directed all the members of the anti-tobacco squad to carry out regular raids and stop shops from selling tobacco products within 100 yards of educational institutions.

Singh said: “I am very happy to declare Bokaro a smoke-free district.” He said that “the general public, educational institutions, the media, district-level officials, subdivisional-level officers, block-level officials, the Chas Municipal Corporation and all the officials of the health department should ensure that Bokaro remains smoke-free”.

He said that smoking is a dangerous habit. “Smoking publicly is very unsafe. Running the tobacco control programme as a campaign has yielded very good results,” he said.