Birsa in all hearts 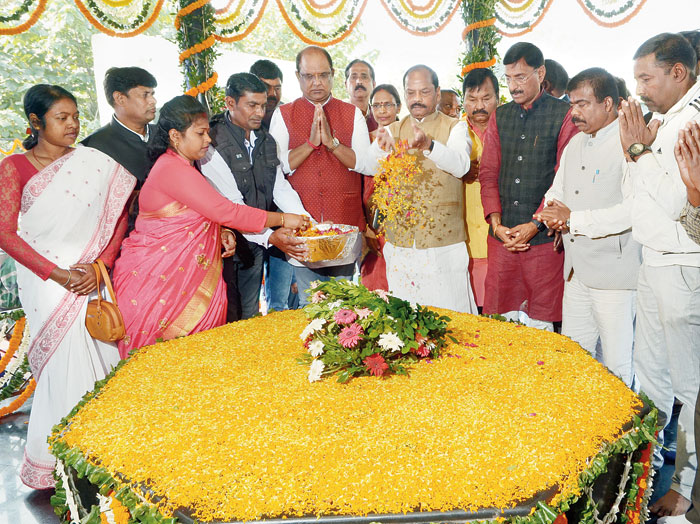 The capital, as well as the rest of Jharkhand, observed on Friday the 144th birth anniversary of legendary tribal leader Birsa Munda and Jharkhand’s 20th Statehood Day, as the poll-bound state completed 19 years of existence after being carved out of Bihar.

Statehood Day celebrations, unlike in other years, were low-key on Friday, as the model code of conduct is clamped in the state that will vote in five phases across its 81 Assembly seats from November 30 to December 20, the result of which will be out on December 23. State government sops, the most-awaited feature of the day, were missing.

In Ranchi, governor Droupadi Murmu and chief minister Raghubar Das started the day by garlanding the statue of Birsa Munda, first at Birsa Samadhi Sthal at Kokar and then at Birsa Chowk.

Congratulating the people of Jharkhand, the CM asked people to remember the ideals and valour of the tribal icon.

JMM supremo Shibu Soren, arguably the only surviving prominent leader of the statehood movement, accompanied by son Hemant, the executive president of JMM, and party members, went to Kokar to garland Birsa’s statue.

Governor Murmu also went to Birsa Agricultural University (BAU) at Kanke where the birth anniversary of the tribal icon, who waged a war against the British and died in jail at the young age of 25, was celebrated. “Birsa Munda not only waged a war against the British but contributed a lot towards the social, cultural and spiritual development of tribal society,” she said.

An event was organised at the old Ranchi jail compound where Birsa passed his last days.

“Ranchi is not new for me,” the Chak De singer told this reporter. “I have performed in Jharkhand at least five times before. I have sung before in Ranchi, Silli and Jamshedpur in front of huge audiences. Before coming here, I had heard scary stories about the region but once I came to Bihar and Jharkhand, I found people in both states very friendly.”

Any wish for the state? “Besides minerals, the state is rich in sporting talent,” said the singer. “Jharkhand can gift India many more Dhonis.”