Champai, 63, who has a close rapport with rural tribal electorate, knows he has to be accepted by urban voters as well 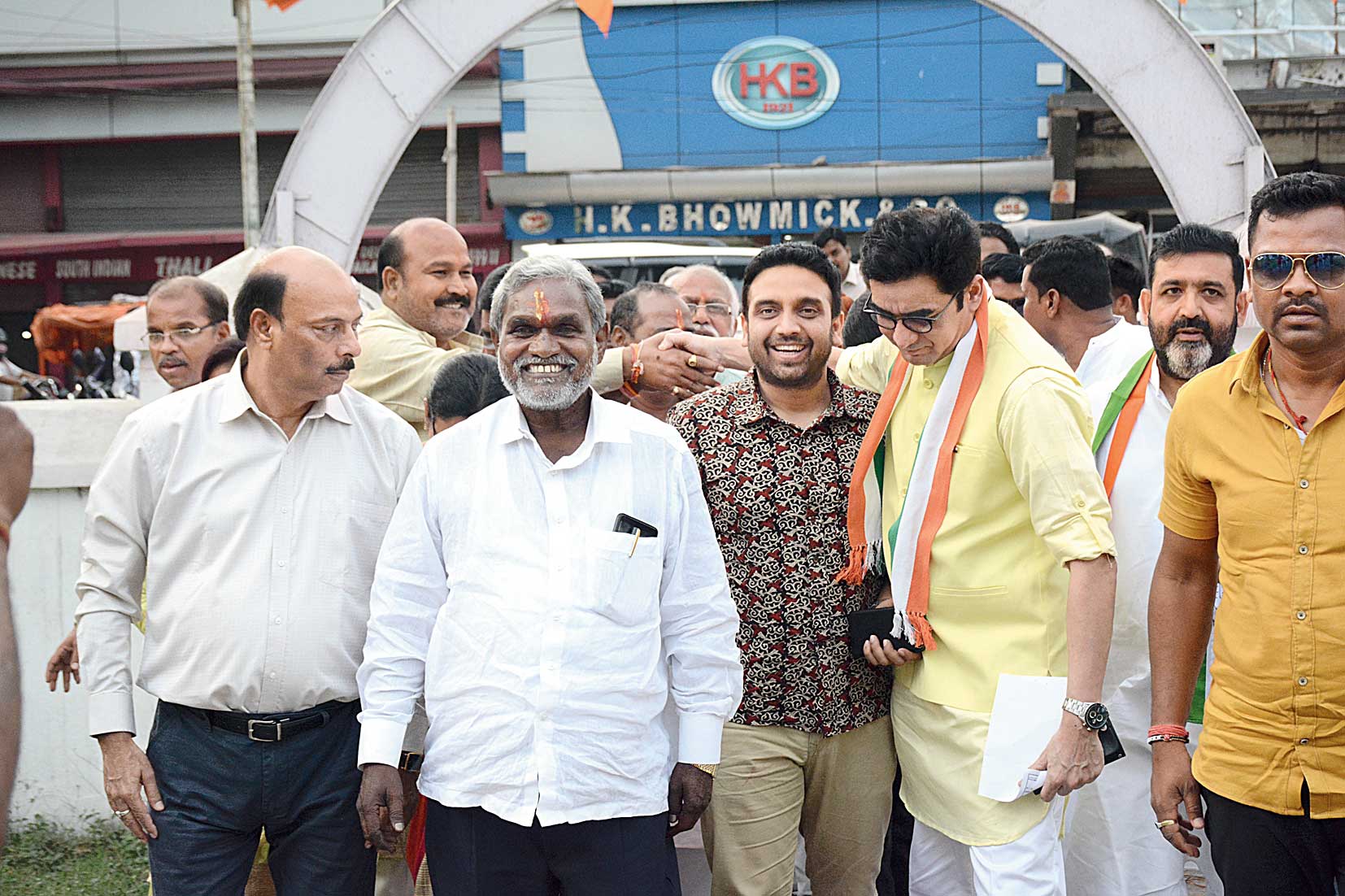 Double duty seems to be the campaign mantra for Opposition alliance candidate for Jamshedpur Parliamentary seat, JMM’s Champai Soren, who meets rural voters during day and urban ones after dusk.

Five-time MLA and statehood leader Champai, 63, who has a close rapport with rural tribal electorate, knows he has to be accepted by urban voters as well, aware of the tough challenge in the form of BJP and its sitting MP Bidyut Baran Mahto.

Mahto, who was with JMM till 2014, also had close links with Champai Soren as both trace their roots in Seraikela-Kharsawan. The exigencies of politics have pitted them against each other this Lok Sabha polls as they vie for the same prestigious seat.

The Jamshedpur seat has sent parliamentarians from both the BJP and the JMM since the late 1980s. If JMM’s Shailendra Mahto, Sunil Mahto, Suman Mahto won the hearts of voters, so did the BJP’s Nitish Bharadwaj, Abha Mahto, Arjun Munda and finally Bidyut Baran Mahto.

“We are confident of our support among tribals in rural areas, but we make sure Champai da meets them in the morning. In the evening, we connect with urban voters, our weak link. We are trying to reach out to as many community groups and social organisations as possible in urban areas from sundown. Champai da is a tireless man,” he said.

On Friday, Champai began from his Jhilingora home in Seraikela around 7.30am and interacted with panchayat samiti members at Hata and visited panchayats in Santhal-Bhumij dominated Potka block.

“Our party has been fighting for rights of tribals over water, forest and land. But BJP government is usurping your land and giving it to industrialists. This party is against Adivasis and moolvasis (original settlers),” Champai told villagers, including a large group of women, at Sangram panchayat in Potka.

During an impromptu padyatra, Champai is affable and relaxed as he meets people of all ages and greets the elderly and mukhiyas with respect. “Villagers rely more on the persuasion of mukhiyas (during voting),” said a JMM party worker.

Alighting from his SUV at another Bhumij-dominated village Mukundpur in Potka, Champai greets elderly ladies sitting under a tree. In few minutes, some 60 villagers gather to listen to Champai on unemployment, farmer distress and government failures. “The MP (Mahto) is more confident of seeking votes in PM Modi’s name than on his own achievements,” he quipped.

On Friday evening, Champai visited akharas hosting Ram Navami rituals in Bagunhatu, Bistupur, Sonari, Kadma and Burmamines. Stressing on inclusion, he said at Mahabir Akhara, Kadma, “Lord Ram’s ideals are needed to build society, not attack others in the name of religion and caste.”

An elderly man at the akhara samiti applauded Champai. “He’s speaking the truth. In the last few years, the BJP did try to disturb the social fabric.”

JMM youth wing leader Mahabir Murmu said he loved going with Champai. “No matter how many places he goes to or how many hours he campaigns, Champai da never loses his smile,” Murmu said.

East Singhbhum DC Amit Kumar on Saturday held a training for booth-level officers at XLRI Auditorium for May 12 polls for Jamshedpur LS seat. Booth-level officers were asked to give voters’ slips at doorstep of voters before polls.