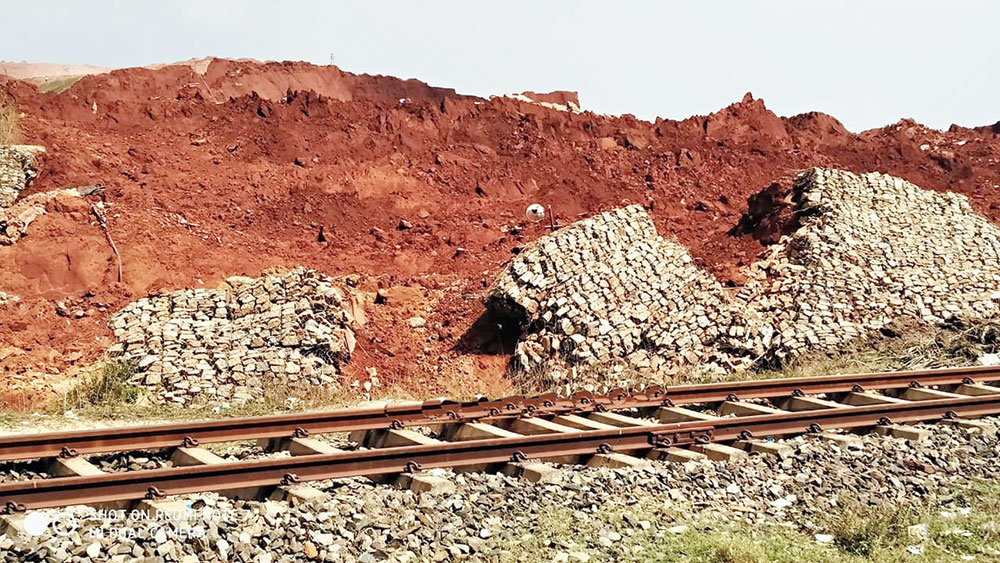 Local residents expressed the fear that the liquid waste could run into the Subernarekha river that was less than 100 metres from the site.

“The Subernarekha river flows along the eastern side of the caustic pond. If proper precaution is not taken immediately the dump containing alkaline liquid could go into the river through an adjacent drain,” said a local resident.

Ranchi deputy commissioner Rai Mahimapat Ray, who reached the spot along with SDO Garima Singh and senior superintendent of police Anish Gupta, said a probe had been ordered.

“A showcause notice has been issued to the Hindalco management, asking it to explain the circumstance under which such an accident took place. Apart from this, the state pollution board is also taking action,” Rai said.

A resident claimed the sludge had reached a bypass rail track of Muri station and movement of goods trains could be disrupted.

Ray said the railways had initiated efforts to ensure the tracks weren’t affected. “We have directed all concerned to ensure that movement of trains is not hampered,” he said.

More than 20 workers were feared buried after a 100-acre pond of liquid industrial waste from an aluminium factory gave way, threatening to spill the sludge onto train tracks at Muri station barely 500 metres from the site.

A National Disaster Response team was able to reach Muri, 65km away, within an hour of the accident at 2pm. Till 7pm, sources said, two persons had been rescued. Rescue efforts were on.

Hindustan Aluminum Corporation Limited (Hindalco), which dumps waste from a plant at the Muri site, however, said four persons had suffered minor injuries and one workman was missing.  In a mail today it said preliminary investigations had indicated 'no material impact on the surrounding environment or to property'. It said efforts were on to clear the spillage. 'Four persons with minor injuries have been treated, and one contract workman is missing,' Hindalco said.

About the accident, the company wrote: '... There was an incident in the red mud (bauxite residue) storage area connected to the alumina plant situated at Muri, Jharkhand, on 9th April 2019. The incident involved a spillage in the red mud cake storage area. As a precautionary measure, operations have been temporarily suspended to assess the situation.'

It wasn’t immediately clear how the dump, primarily of caustic soda — a main feedstock for alumina used to produce aluminium — collapsed.

Local residents claimed the spillover occurred after a wall of the pond collapsed.

“There is a guard wall of stone around the pond. The wall seems to have collapsed because of the weight of the liquid,” a resident of the area said.

Another man claimed such an accident was waiting to happen because of indiscriminate dumping of waste from a plant belonging to Hindalco.

“Former JMM MLA Amit Kumar has raised the issue in the Assembly but nothing has been done,” he claimed.