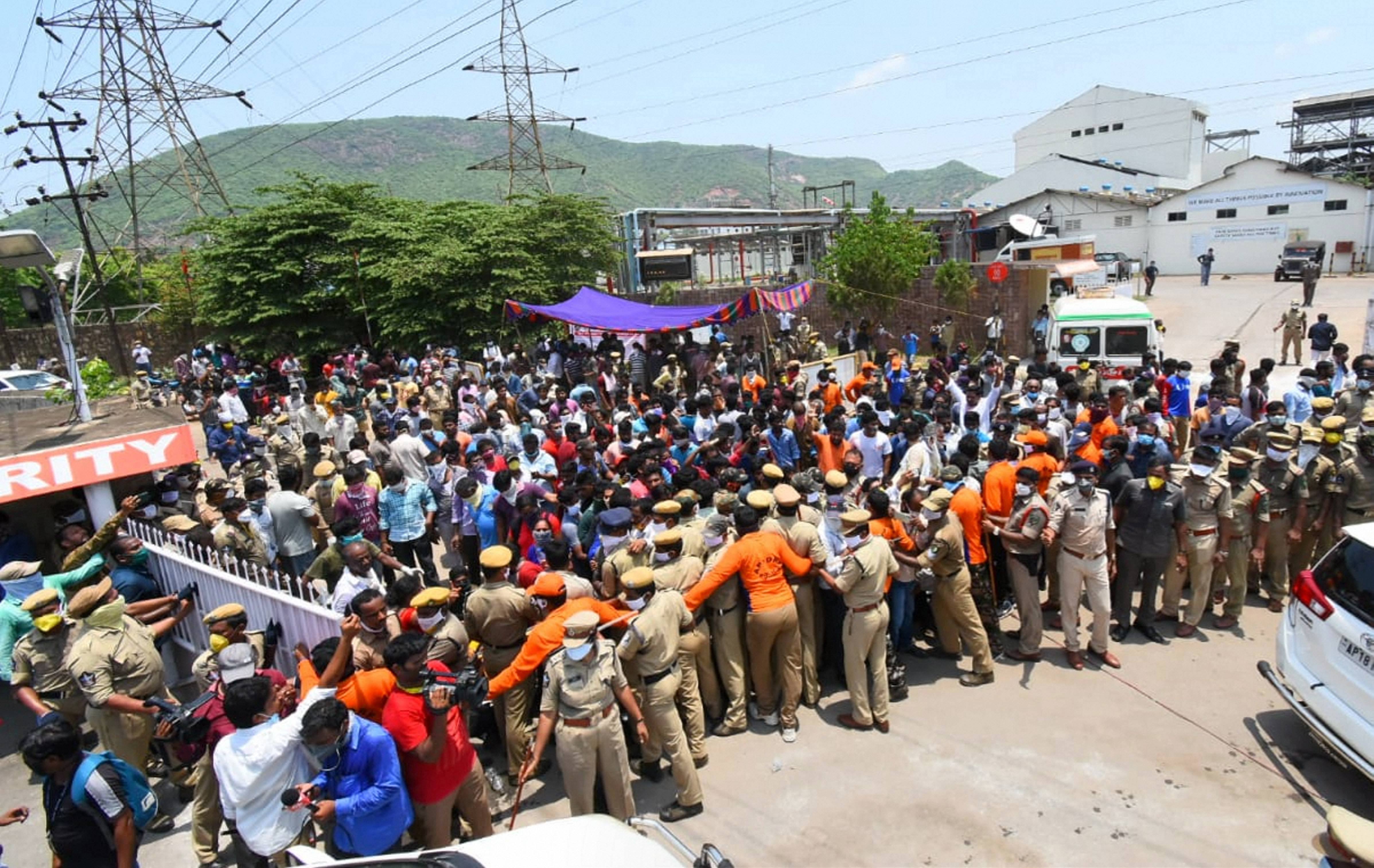 The Andhra Pradesh government on Saturday said the situation was 'normal' in RR Venkatapuram village, where a styrene vapour leak from the LG Polymers plant claimed 12 lives and left over 300 people hospitalized with various ailments.

Director General of Police D Gautam Sawang and Special Chief Secretary (Industries) Karikal Valaven inspected the plant and spoke to the LG Polymers plant management. Later they told reporters 'everything is normal and there is no need to panic.'

Even as Sawang was inspecting the vapour leak spot and talking to the management on the measures taken to restore normalcy, irate villagers staged a protest demanding immediate closure of the plant.

According to the DGP, temperature at the styrene storage tank, where the vapour leak occurred, has come down, as also the PPM (ambient air quality) level.

'Definitely the air is also fresh and there is nothing to worry about. In the coming days, life will come back to normalcy,' the DGP said.

'Just to be on the safe side, as per protocol, people are being asked to stay away for 48 hours. That period will end tomorrow. Scientists and experts from different parts of the country, including New Delhi are coming here. They will review the situation and give final clearance,' he added.

'Experts from the Petroleum University, Indian Institute of Chemical Technology and others are coming here.

After they inspect, we will take further required steps,' the Special Chief Secretary added.

Hundreds of villagers, who were provided shelter in Visakhapatnam after the vapour leak, returned to the village this morning, raising slogans against the factory management and demanding its closure.

The protesters placed two bodies of those who died in the gas leak in front of the factory main gate as part of the agitation while some youths barged into the plant.

The bodies were brought to the village for cremation on Saturday from the KGH mortuary after post-mortem. The angry villagers, however, stopped the ambulances in front of the plant gate and laid the bodies on the road.

The police posted near the plant for security duty tried to prevent the villagers from going near the plant but the latter broke the security cordon and staged a sit-in near the factory gate.

Police initially took some of the protesters into custody and whisked them away but scores of others entered the scene subsequently.

At one point, many of the villagers barged into the plant through a small entrance gate and one woman was seen falling at the DGP's feet and pleading that the unit be closed forthwith.

Police finally managed to drive the villagers from the factory premises.

Meanwhile, the LG management issued a statement saying, 'We are happy to confirm that the status-quo at the plant is brought under control this morning.'

It said a special task force has been set up to help victims and families to 'resolve any issues' and provide every assistance to the bereaved families.

'Our initial investigations suggest that the cause of the incident is prima facie by the leaking vapor from the Styrene Monomer (SM) storage tank near the GPPS (General Purpose Poly Styrene) factory on Thursday, May 7,' the company statement said.

The company teams were working with the government to assess the impact of the damage caused and create concrete measures to deliver an effective care package that could be implemented immediately.

The statement also said. 'All families will be contacted shortly. This team has the responsibility to provide every support for the deceased, medical supplies and household goods, and emotional management for psychological stability to all injured and victims.”

As the demand for closure of the plant became vociferous on Saturday, the LG management sought to assuage the feelings promising to 'do our best' to resolve the situation and prevent any incident in the future.