Advertisement
Home / India / Violence will not be tolerated: JNU adminstration

Violence will not be tolerated: JNU adminstration 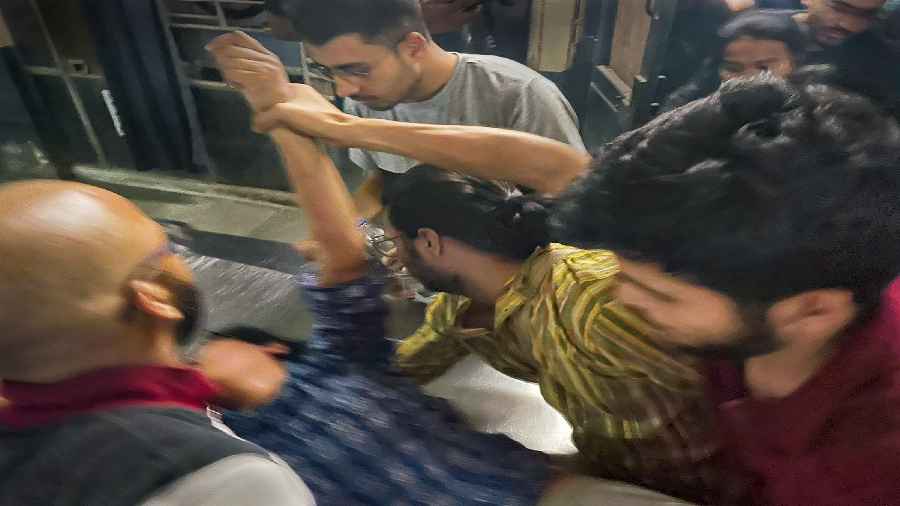 The JNU administration on Monday said that no violence will be tolerated on campus and warned the students from getting involved in any incident which disturbs peace and harmony on campus.

The warning by JNU came a day after two groups of students clashed at the varsity's Kaveri Hostel on Sunday allegedly over serving of non-vegetarian food on Ram Navami in the mess, with police saying six students were injured in the violence.

"Taking serious note of the incident, the Vice Chancellor, rector and other officials visited the hostel and met the students. The VC conveyed that no violence will be tolerated on campus and appealed the students to maintain peace and harmony," the Registrar said in an official appeal to the students.

"JNU administration reiterates its resolve for zero tolerance towards any form of violence on campus. The students are also warned to refrain from involving in such incidents which disturb the peace and harmony on campus. If anyone is found indulging in such acts, they will be liable for disciplinary action as per university rules," he added.

According to police, security has been tightened at the Jawaharlal Nehru University to maintain peace and ensure no untoward incident takes place again.

The RSS-affiliated Akhil Bharatiya Vidyarthi Parishad (ABVP) on Monday alleged that students from the Left wanted to disrupt the Ram Navami pooja and are using diversionary tactics by raising the issue of non-vegetarian food.

Rohit Kumar, ABVP JNU unit president, said that the ABVP did not have any issue with non-vegetarian food.

Two groups of students clashed at the JNU's Kaveri Hostel on Sunday allegedly over serving of non-vegetarian food on Ram Navami in the mess, with police saying six students were injured in the violence.

He claimed that seven days back, there was a General Body Meeting of Kaveri Hostel mess committee where it was unanimously decided that no non-vegetarian food will be cooked in the hostel mess on Sunday on the occasion of Ram Navami.

"Muslim students were also in agreement with the decision. Three days back when the poster for Ram Navami pooja was shared, students from the Left threatened to throw meat bones to disrupt the pooja," he said.

He also alleged that the left students even brought out a fake handwritten circular on April 9, a day before the puja.

"The puja was supposed to begin at 3.30 pm on April 10 but these students came to disrupt it. They had to return seeing the huge crowd of devotees. Finally the puja started at 5.30 pm and at 8.30 pm they came armed with stones, sticks, lathis, CFL tubes and started attacking students," he said.

He said that the ABVP did not have any issue with non-vegetarian food being served.

"In other hostels like Koyna, Periyar, etc., non-vegetarian food was served yesterday. The Left are playing diversionary tactics. We cannot dictate food choices but neither can the left do that," he said.

Raghib, mess secretary of Kaveri Hostel, denied that there was any GBM held on the matter.

"I got a message from the mess warden a day prior to Sunday that non vegetarian food should not be served tomorrow. I asked him to give it in writing but he didn't do it," he said.

Non-vegetarian food is served in the hostel mess on Wednesday, Friday and Sunday and the menu is pre-decided at the beginning of the month.

The clash of students at the Jawaharlal Nehru University's Kaveri Hostel was an "unfortunate" incident, Delhi Home Minister Satyendar Jain said on Monday.

Two groups of students had clashed at the varsity's Kaveri Hostel here allegedly over serving of non-vegetarian food in the mess on Ram Navami on Sunday, with police saying six students were injured in the incident.

The two groups, however, had claimed that over 60 students were injured from both sides.

He, however, added that the incident was "unfortunate".

The Left-controlled JNU Students' Union (JNUSU) and RSS-affiliated Akhil Bharatiya Vidyarthi Parishad had on Sunday accused each other of pelting stones and injuring their members.

The JNU administration on Monday said no violence will be tolerated on the campus and warned the students from getting involved in any incident which disturbs peace and harmony on the campus.