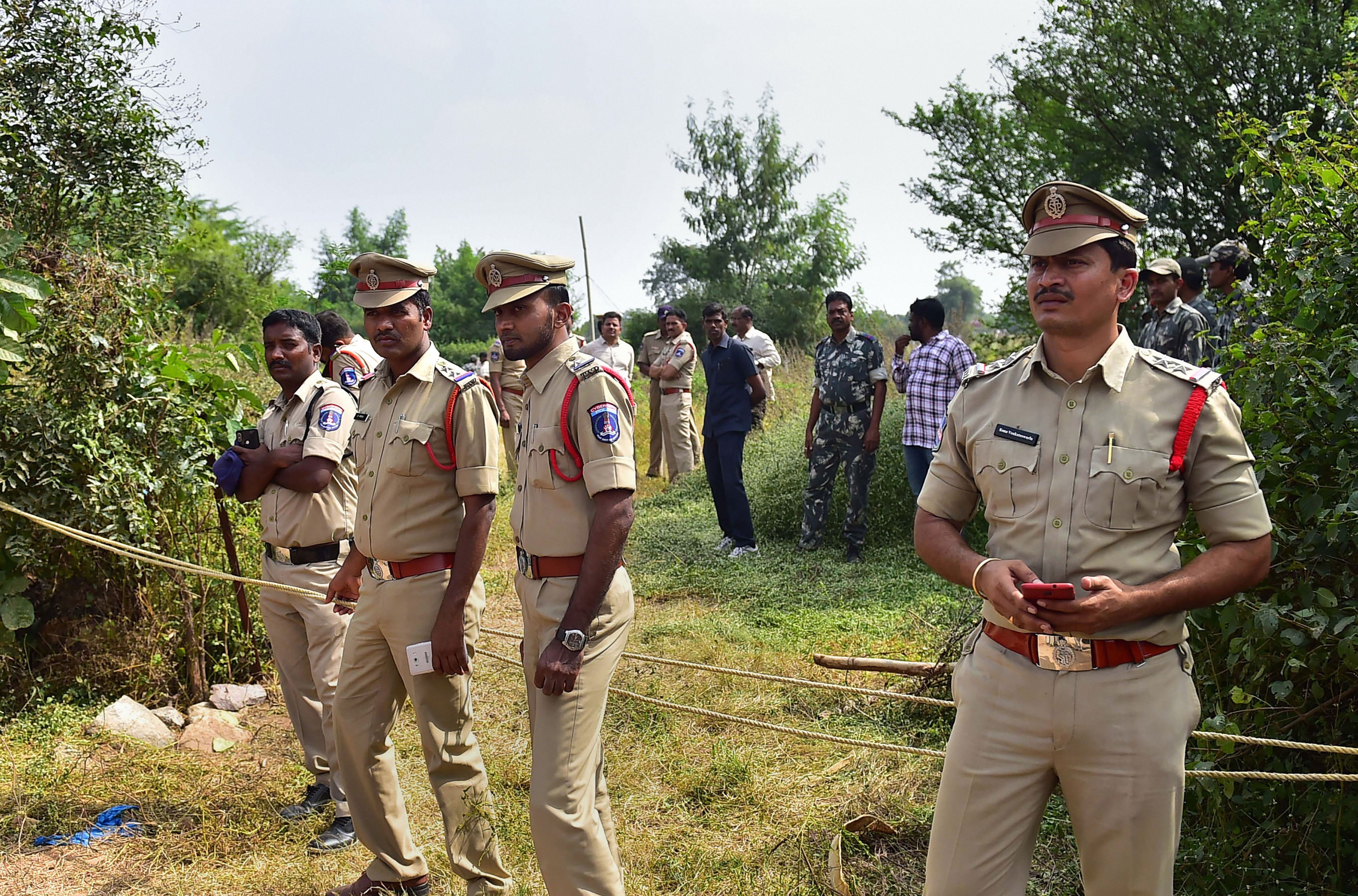 Policemen stand guard the area where four accused in the rape and murder case of a woman veterinarian were shot dead by police, at Shadnagar of Ranga Reddy district in Hyderabad, Friday, Dec. 6, 2019
PTI
The Telegraph And PTI   |   New Delhi   |   Published 06.12.19, 08:04 AM

The rape and murder case of the veterinarian that happened last month at Shadnagar near Hyderabad took an unexpected turn early Friday morning as people woke up to the news of the four accused being killed in an encounter with police claiming that they were trying to escape.

Early morning, they were scenes of celebration in the nation as people burst crackers and congratulated the police for delivering “justice” to the veterinarian.

#Disha's colony members burst crackers and distribute sweets to cops. They say even though they have lost her, they're happy that justice has been served within 10 days. #JusticeForDisha #EncounterNight pic.twitter.com/Fma0HdY8bc

The four men, all lorry workers, aged between 20 and 24, were arrested on November 29 for allegedly raping and killing the woman by smothering her and later burning her body.

They were taken to the crime scene on Friday morning by the police as part of the investigation, a source said.

'They fired upon the police team and we retaliated in self-defence. Two of our men were also injured in the incident,' a source told PTI.

At the same time, many took to Twitter and other means to raise questions on the manner of the encounter, saying that police are acting like “lynch mobs”.

The police cannot act like a lynch mob under any circumstances, said several rights, adding that the encounter was an attempt by authorities to distract people from the government's failures to safeguard women's rights.

Twitter was abuzz with scores of tweets expressing anger over the encounter.

While author Anand Ranganathan said that people need to choose between “law and lawlessness,” another journalist-cum-author Nilanjana Roy advised people to refrain from “extra-judicial measures.”

Vishal Jangotra was arrested and charged of Rape in the Kathua Case. He was acquitted by the court. He wasn't even there at the scene of crime.

He is alive today because he wasn't killed in a police encounter.

This nation must choose between Law and Lawlessness.

Please, please educate yourself about the extent and enormity of violence against women before you applaud extreme and chilling extra-judicial measures that do absolutely nothing to fix the problem of violent masculinity in India, or fix the deeply broken trial system.

Activist Tehseen Poonawalla raised suspicion on the manner the encounter was done. Another Twitter user said she finds no “catharsis” in the encounter as she thought she would if rapists are shot and killed.

Questions on the #EncounterNight :
Did all 4 accused snatch weapons?
All 4 tried to escape?
Why not shoot their hands/legs?
Was the pistol not attached to the cops? Were 4 guns snatched?
Were these accused trained in shooting that they could open the locks of the gun?#Encounter

As much as I have always thought that rapists should be shot, castrated, hung immediately, without due process, without a chance for them to seek for mercy - I find no catharsis in these four rapists being shot by the cops. #HyderabadHorror #hyderabadpolice

Many other Twitterati vociferously condemned the incident.

Now nobody will ever know if the four men killed by the police were innocent men, arrested fast to show action. And whether four of the most brutal rapists roam free, to rape and kill more women.#EncounterNight #Encounter https://t.co/LEXxSKWzre

Do you know consequences of normalizing #Encounter ?

◆Next time police will arrest random ppl to save their own image.

◆Kill them to satisfy conscience of society.

◆Politicians will take benefit of it.

◆Real criminals will be free.

Person: Suspected Hyderabad rapists were killed in a Police #Encounter

Bhakt: They deserved it!

Bhakt: They are yet to be proven guilty. Let's wait for investigation to finish.

Its interesting how most political leaders across the spectrum are condoning the #encounter by #hyderabadpolice when many of their colleagues in their parties are accused of similar crimes. Should they be encountered too?

There is an uncle in the family whose only solution to any problem this country faces is "Ek line me khade kar ke goliyo se udaa dena chahiye"
Corruption? Goli
Rape? Goli
Not his fav Coalition govt? Goli

He would be happy today. This is the core voter. #EncounterNight

Among those who condemned the encounter was National Commission for Women chief Rekha Sharma, who had demanded death penalty for the accused, said it should have come through proper judicial channels.

Congress leader Shashi Tharoor was also among those who expressed a voice of reason and said, Agree in principle. We need to know more, for instance if the criminals were armed, the police may have been justified in opening fire preemptively. Until details emerge we should not rush to condemn. But extra-judicial killings are otherwise unacceptable in a society of laws.”

The parents of Nirbhaya, the victim of 2012 Delhi gangrape, welcomed the encounter, saying the parents of the veterinarian did not have to wait for justice to be meted out.