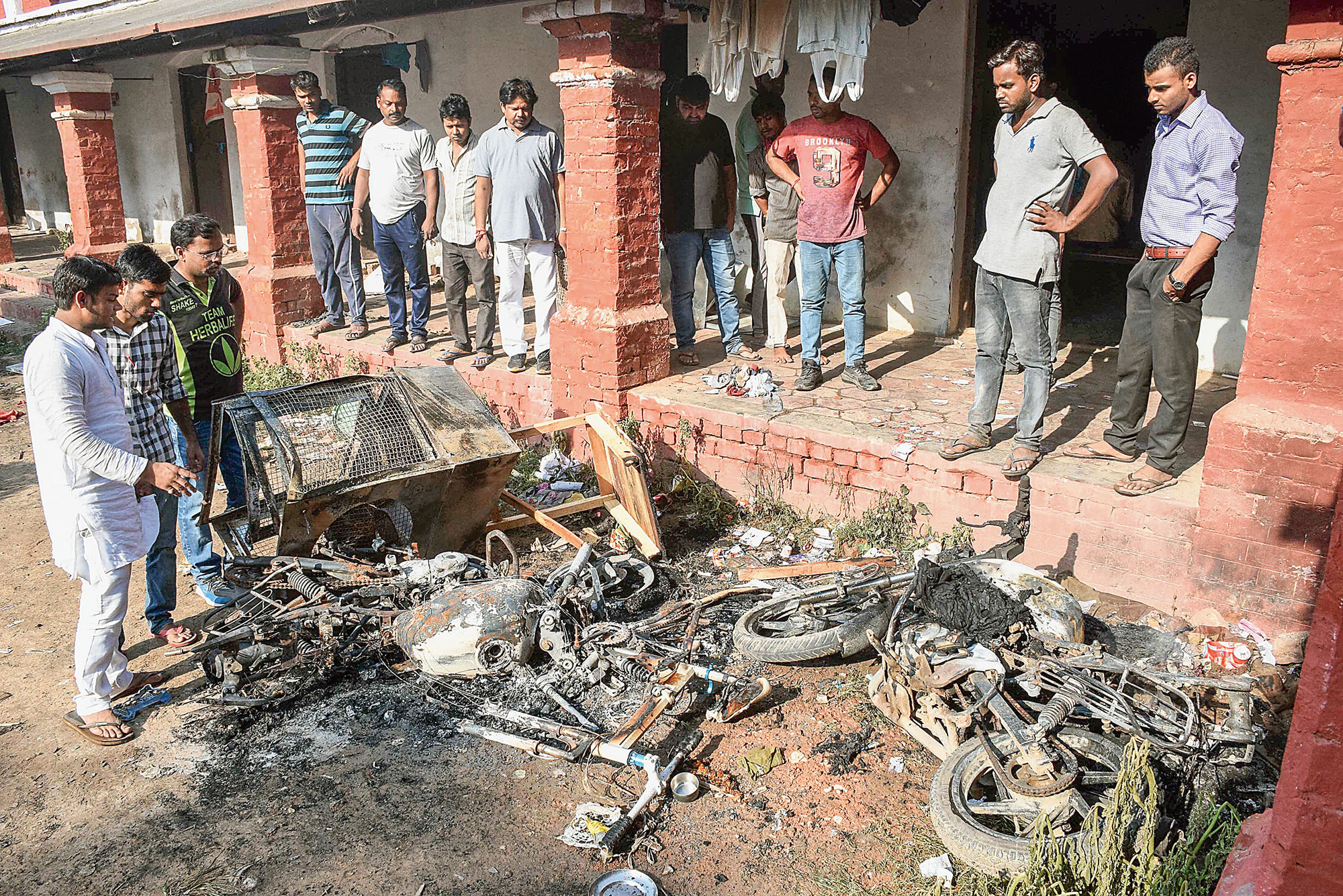 Students look at the charred furniture and vehicles that were set ablaze after the election result at the Allahabad University.
PTI
Our Special Correspondent   |   Lucknow   |   Published 06.10.18, 08:59 PM

Suspected Akhil Bharatiya Vidyarthi Parishad activists opened fire late on Friday night and set ablaze hostel rooms after the Sangh affiliate lost the Allahabad University Student Union polls, seen as an indicator of which way the wind was blowing ahead of bigger elections.

A police sub-inspector injured in the violence said ABVP cadres were firing indiscriminately from revolvers.

Monika Chaudhary, national media convener of the ABVP, however, claimed no member of the outfit was involved in the mayhem that left two policemen and five students injured.

University authorities had declared the institute closed for a week but late on Saturday evening proctor H.S. Upadhyay, who had been appointed the election officer, said the Uttar Pradesh varsity would reopen on Tuesday.

The violence came less than a month after ABVP cadres were accused of going on the rampage at Delhi’s JNU, where a Left alliance won the student union polls, and a few months ahead of Lok Sabha elections next year.

Sources said the trouble at Allahabad University broke out around 1.30am soon after the counting for Friday’s polls had ended and two nominees each of the Samajwadi Chhatra Sabha (SCS), the youth wing of the Samajwadi Party, and the Congress-backed NSUI were declared winners for the posts of union president, vice-president, joint secretary and cultural secretary. The ABVP won the lone remaining post of union general secretary.

“The situation was such that the police somehow took me and other winners to hostel rooms under heavy security. A few minutes later some people barged in and set ablaze eight rooms of Holland Hall,” Udai, who succeeds fellow SCS member Avanish Yadav as president, told reporters.

Holland Hall, one of the hostels, is located just outside the varsity campus.

The fire gutted Udai’s room and the rooms of Avanish and SCS supporter Ajit Yadav. It took four hours for three fire engines to douse the flames. The gate, lawn and a room at KPUC Hostel, another student facility near the campus, were also damaged. Crude bombs were apparently hurled too at the hostel gates.

“The ABVP members knew they would lose and were mounting pressure on the university authorities to manipulate the results. Senior BJP leaders from Lucknow were trying to monitor the counting but the university administration didn’t listen to them. The ABVP members carried arms and had brought criminals from outside. They attacked us with the clear intention to kill,” Avanish said.

Chaudhary, the ABVP’s national media convener, claimed the outfit had no role in the violence. “I have come to know that the supporters

of the candidates of other organisations had clashed with each other. No ABVP member was involved,” she told The Telegraph.

Vinit Singh, an injured sub-inspector, however, told reporters at a hospital that many ABVP members had opened fire from revolvers.

Nitin Tiwari, senior superintendent of police, said: “There is peace in the university and surrounding areas after the initial excitement and clashes. We have deployed a force to prevent a recurrence of the violence and are identifying the culprits.”

According to the results that were declared, Udai polled 3,698 votes for the president’s post, beating the ABVP candidate who got 2,924 votes. The SCS also won the joint secretary’s post with 3,199 votes, beating the NSUI candidate who polled 2,247 votes.

The Congress-backed outfit won the post of cultural secretary too, with 1,832 votes to the SCS’s 1,658.