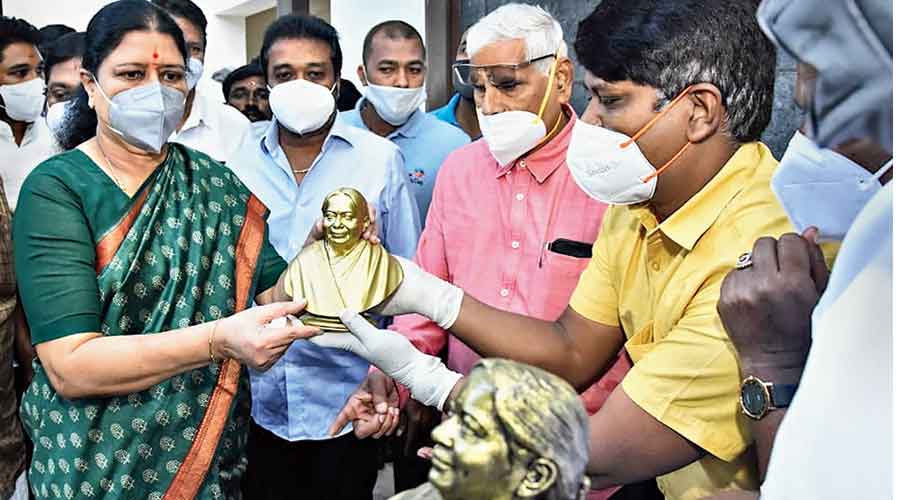 Released from jail recently and after a Covid recovery, V.K. Sasikala, who had been a close aide of former Tamil Nadu chief minister Jayalalithaa, drove down here from Bangalore on Monday to thousands of her supporters mobbing her car at various NH spots.

The excitement and chaos was a slice of an earlier era of political exuberance, but came as cold comfort to the ruling AIADMK.

Attired in a green saree and with her face mask on, Sasikala, 66, warmly greeting her supporters en route to Chennai, appeared less intimidating from her imperious days as Jayalalithaa’s former aide, but her speeding Innova car fluttering the AIADMK party flag on its bonnet spoke of her defiant spirit to recapture the party.

Even as T.T.V. Dhinakaran, her nephew and general secretary of the breakaway AIADMK, Amma Makkal Munnetra Kazhagam (AMMK), and functionaries escorted ‘Chinnamma’, as Sasikala is referred to, in other vehicles, their spirit of open defiance visibly gave the jitters to the ruling AIADMK, which had already expelled both from the party’s primary membership.

Disregarding a Tamil Nadu police notice not to use the AIADMK flag on her vehicle, Sasikala on entering the state border near Zuzuwadi in Krishnagiri district was told by the local officials to remove the flag.

Sasikala then got down from the vehicle and got into another Innova that fluttered the AIADMK flag as she drove on. The car, as Dhinakaran said later, belonged to an AIADMK office-bearer, S.R. Sampangi from nearby Hosur, who had come to greet Chinnamma.

“I will not bow to repressive tactics and will certainly be in active politics,” Sasikala told reporters, speaking briefly at one place in Krishnagiri district.

Sasikala reached her new home in T. Nagar in the city later in the evening to rousing reception by AMMK functionaries and well wishers.