US backs India again on permanent membership of UNSC 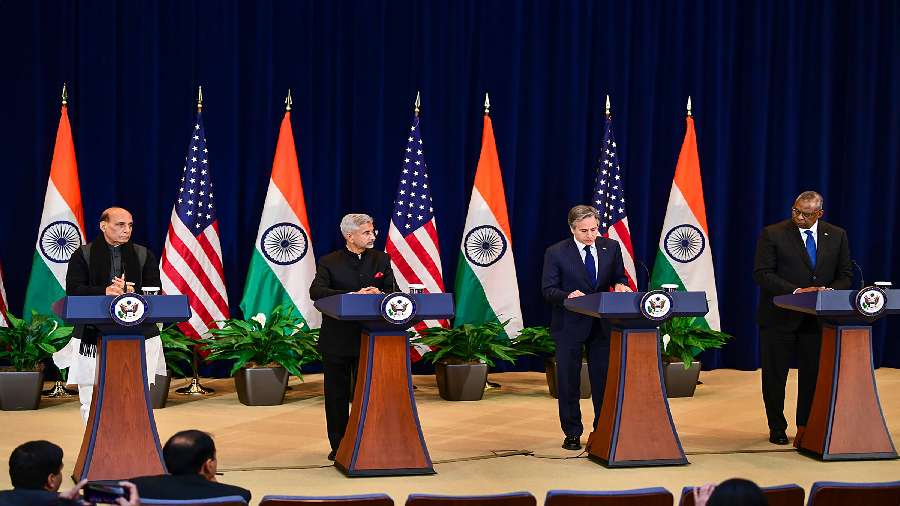 The Biden administration has reaffirmed its commitment to support India's permanent membership in a reformed UN Security Council and New Delhi's entry to the Nuclear Suppliers' Group.

The US also praised India for its significant contributions as a member of the 15-member apex decision making body of the UN.

In a joint statement issued at the conclusion of the India-US 2+2 ministerial here, the United States congratulated India for its significant contributions as a member of the United Nations Security Council (UNSC) for the term 2021-2022.

Defence Minister Rajnath Singh and External Affairs Minister S Jaishankar led the Indian delegation for 2+2, while the US side was represented by Defence Secretary Lloyd Austin and Secretary of State Tony Blinken.

The Ministers reiterated their commitment to work together in close coordination at the UNSC and in international organisations. The US reaffirmed its continued support for India's permanent membership in a reformed UNSC and for India's entry to the Nuclear Suppliers' Group, said the joint statement.

Considering growing national security threats from both state and non-state malicious cyber actors, the ministers recognised the importance of an open, interoperable, secure, and reliable Internet and stable cyberspace, it said.

On December 2, India said it continues to engage with members of the NSG for support for an early decision on the country's bid for membership of the grouping.

The 48-member NSG is an elite club of countries that deals with the trade-in nuclear technology and fissile materials besides contributing to the non-proliferation of nuclear weapons.

China, one of the five nuclear-weapon states, stridently opposes India's NSG bid primarily on the grounds that New Delhi is not a signatory to the Nuclear Non-Proliferation Treaty (NPT). Its opposition has made India's entry into the group difficult as the NSG works on the principle of consensus.

According to the joint statement, both sides reaffirmed the 2021 reports of the UN Open-Ended Working Group and the UN Group of Governmental Experts, which articulate a framework of responsible state behaviour in cyberspace and committed to working together in the future multilateral negotiations to encourage States to implement the framework.

They confirmed their intent to work closely as part of ongoing efforts to counter the use of information communications technologies for criminal purposes.

The four ministers called on the Taliban to abide by UNSC Resolution 2593 (2021), which demands that Afghan territory must never again be used to threaten or attack any country or shelter or train terrorists or plan or finance terrorist attacks.

They urged the Taliban to adhere to these and all other commitments; respect the human rights of all Afghans, including women, children, and members of minority groups; and uphold freedom of travel. They also emphasised the importance of an inclusive Afghan government and unhindered access for the United Nations and its implementing partners to deliver humanitarian assistance.

They recommitted to close consultations on Afghanistan to help facilitate an inclusive and peaceful future for all Afghans.

Calling for the cessation of violence in Myanmar, the release of all those arbitrarily detained, and a swift return to the path of democracy and inclusive governance, the ministers also called for urgent implementation of the ASEAN Five Point Consensus.