UP: kin on dharna, kidnap and murder case goes to CBI 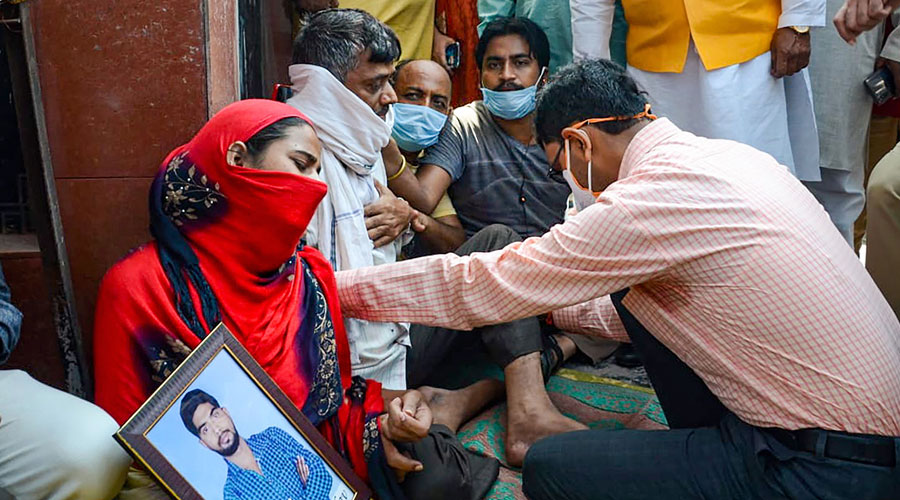 The Uttar Pradesh government has recommended to the Union home ministry a CBI probe into the kidnapping and murder of a youth in which police involvement has been alleged, hours after his family had begun a dharna as their repeated pleas for an investigation by the central agency had been disregarded.

The parents and two younger sisters of Sanjeet Yadav, 28, had begun a dharna under the statue of Lal Bahadur Shastri at the Shastri Chawk roundabout in Kanpur city on Sunday morning. They left only after the district magistrate informed them after six hours that the state government had recommended a CBI probe into the case.

The family has since then alleged that the police were in cahoots with the kidnappers, that senior officers had misbehaved with them and even suggested that one of Sanjeet’s sisters was involved in the crime.

They have been demanding the arrest of the “guilty” police officers, some of whom have been suspended, and the transfer of the probe to the CBI.

Chaman Lal told reporters later on Sunday: “We lifted the dharna after Brahm Dev Ram Tiwari, the district magistrate of Kanpur, personally informed us that the state government has agreed to recommend a CBI probe into the case. It is clear that some police officers, who had been monitoring the case and had asked us to pay Rs 30 lakh to the abductors on July 13, were more interested in ensuring that the ransom reached the criminals.

“We are of the firm view that they knew the kidnappers since the beginning and had been in touch with them. We also believe that the police arrested only some of the suspected kidnappers and protected the actual leaders of the gang.”

Awanish Awasthi, the additional chief secretary in the state home department, confirmed to reporters that the government had recommended a CBI investigation. “The family of the victim had been demanding a CBI inquiry. The recommendation has been made,” he said.

Three persons who were arrested on July 24 are said to have admitted to killing Sanjeet and throwing the body into the Pandu river but continuing to demand ransom while assuring the family that he was alive and safe. Sanjeet’s body is yet to be found.

Sanjeet’s family had alleged that the officer who had led the police team that had accompanied Chaman Lal on July 13, inspector Ranjeet Rai, had later insulted them, claimed there was no money in the bag and suggested that one of Sanjeet’s sisters had been involved in the kidnapping. Aparna Gupta, the now-suspended superintendent of police of Kanpur, had allegedly supported Rai.

Rai, Gupta and four other police officers have been suspended.

On Saturday, a man resembling Rai had been seen in a video dancing in uniform with a criminal and his gang. Rai was purportedly seen in the video dancing with Mohammad Haseen alias Raja Kalia, against whom numerous cases of murder and abduction are registered in the same police station to which the officer had been attached.

Kalia and his gang are not accused in the Sanjeet kidnapping and murder case.

At one point in the video, the man resembling Rai, in uniform and gun in the holster, is seen lifting Kalia, an absconder in police records, while dancing. Kalia’s other gang members are also seen dancing, some of them showering notes in a hall decorated with lights and festoons.

Two men resembling Hari Om Gautam, the in-charge of the Ramadevi police outpost, and Anil Kumar Tripathi, a sub-inspector, are also seen dancing in the video, which police sources said appeared to have been filmed at an event hosted by Kalia at a hotel in February.