The girls knew two of their assailants who called in others to help cover up the crime, angry villagers confront cops when they came to take bodies for post-mortem 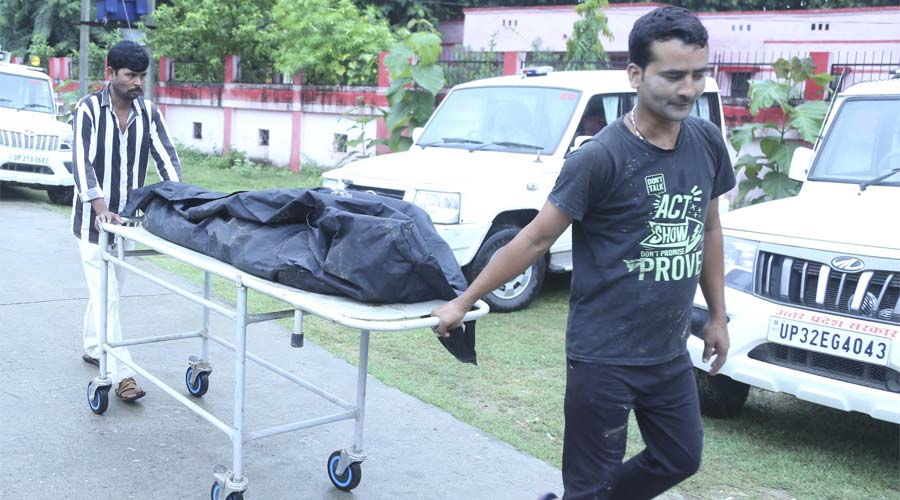 Mortal remains of one of two minor Dalit sisters allegedly raped and murdered being taken for post-mortem at a hospital, in Lakhimpur Kheri on Thursday.
PTI Photo
Our Web Desk   |   Lakhimpur Kheri (UP)   |   Published 15.09.22, 09:25 AM

Six men were arrested on Thursday in connection with the alleged rape and murder of two teenage Dalit sisters who were found hanging from a tree in sugarcane field here, police said.

The girls' burial took place in a field near their home as their community buries the dead rather than carrying out the cremation if they are children.

For several hours their family members had refused to carry out the last rites, demanding compensation and the "death sentence" to the six accused. After several hours of persuasion, they agreed.

Police sources said the post-mortem report revealed that the girls, aged 15 and 17, were raped and then strangled. The bodies were found hanging about a kilometre away from their home on Wednesday.

The Opposition has slammed the state's BJP-led government over law and order, with Congress leader Rahul Gandhi on Thursday saying, "Women's safety cannot be expected from those facilitating the release of rapists and welcoming them."

The former Congress chief was apparently referring to the release of 11 convicts in the Bilkis Bano gangrape after the BJP-led Gujarat government allowed it under its remission policy.

Lakhimpur Kheri Superintendent of Police (SP) Sanjiv Suman told reporters that according to the preliminary probe the girls had left their home on Wednesday afternoon with two of the accused, Junaid and Sohail.

The girl's mother had earlier alleged that they were abducted.

"Junaid and Sohail have confessed to strangling the girls after raping them," the SP said.

He said both were in a relationship with the two sisters, who insisted on marriage, after which they were strangled. The others arrested were identified as Hafizur Rehman, Karimuddin, Arif and Chottu.

Junaid was arrested following an encounter around 8.30 am. A motorcycle, country-made pistol and ammunition were recovered from him.

SP Suman said clothes of the other accused have been sent for an examination.

Suman also dismissed claims that police used force to send the bodies for a post-mortem, which he said was conducted with their family's consent. A videography of the post-mortem examination was also done, the SP added.

Though the girls' father, a landless labourer, expressed satisfaction over the police probe, the victims' kin demanded a government job for a family member, adequate compensation and the "death sentence" to the six accused before the victims' last rites are performed.

Later, District Magistrate Mahendra Bahadur Singh said necessary action is being taken to provide Rs 8.25 lakh compensation each for the two girls under provisions of the SC/ST.

The administration will forward the family's other demands to the state government, the DM said.

Earlier, the victims' mother had lodged a complaint with police, alleging that three motorcycle-borne unidentified youths, along with her neighbour Chhotu, stormed into their hutment and abducted her daughters.

After the incident came to light, villagers staged a demonstration at Nighasan Crossing.

Police took the bodies into custody and sent them to the district headquarters in an ambulance while SP Suman and Assistant Superintendent of Police (APS) Arun Kumar Singh spoke to the villagers.

A large number of police personnel were deployed to ensure law and order in the village. ADGP Kumar said senior officials from Lucknow were also sent to the spot.

The incident has drawn angry reactions from opposition parties.

Bahujan Samaj Party chief Mayawati said, "Criminals in UP are fearless because the priorities of the government are wrong."

"This incident exposes the claims of the government in the matter of law and order. Criminals are moving without any fear since there has been a cover-up in most of the criminal cases, including the one in Hathras. The government should make necessary reforms in its policy, working and priorities," she said in a Hindi tweet.

The Harijan Sevak Sangh, founded by Mahatma Gandhi in 1932, has strongly condemned the incident.

"This is a heinous crime against humanity. We urge the Government of Uttar Pradesh to take exemplary and expeditious penal action against the culprits," a statement by Sangh's president Sankar Kumar Sanyal said.

On the other hand, the state's two deputy chief ministers -- Keshav Prasad Maurya and Brajesh Pathak--said the government was with the victims' family and assured action against the accused.

Maurya in a Hindi tweet said, "Strictest action will be taken against the criminals who have raped and murdered daughters in Lakhimpur Kheri. An issueless opposition should not do politics in such matters!. The punishment given to the accused will set an example."

Pathak tweeted, "The state government stands with the family members of the victims. The government will take such an action that the accused's future generations will shiver."

Police have registered a case against the six accused under Sections 302 (murder), 323 (voluntarily causing hurt), 376 (rape) and 452 (house-trespass after preparation for hurt, assault or wrong ful restraint) of the Indian Penal Code and the Protection of Children from Sexual Offences (POCSO) Act.

A statement from the Lakhimpur Kheri police said provisions of the SC/ST Act have also been included in the FIR.

UP: Rahul takes on BJP over murders