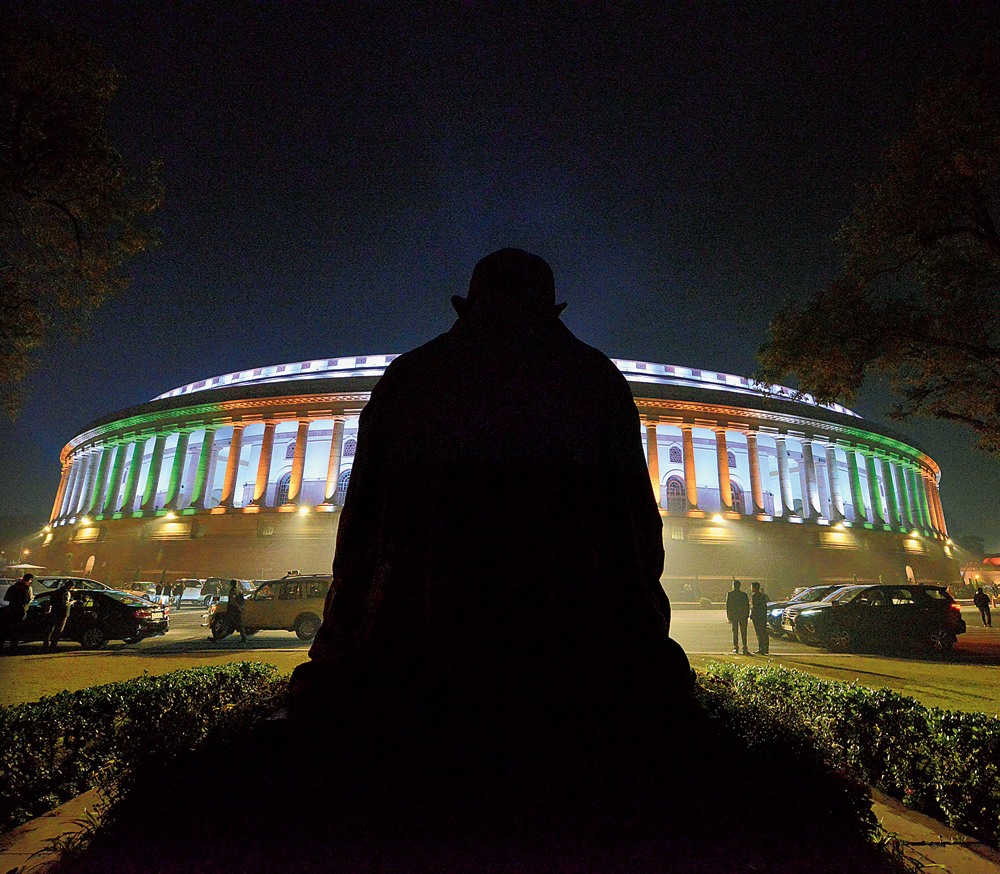 Watched over by what was once a reassuring presence, Parliament House basks in the familiar three colours on Wednesday night when the Rajya Sabha passed the Citizenship (Amendment) Bill
Picture by Prem Singh
PTI And Our Bureau   |   New Delhi   |   Published 11.12.19, 05:16 PM

The Rajya Sabha on Wednesday approved the Citizenship (Amendment) Bill, completing the legislative procedure for giving Indian citizenship to non-Muslim migrants from Pakistan, Afghanistan and Bangladesh.

The bill was passed with 125 votes in favour and 105 against it. The Shiv Sena, which had voted for the bill in the Lok Sabha, was not present in the Rajya Sabha when voting took place.

Besides the BJP, its allies such as JDU and SAD, the legislation was supported by AIADMK, BJD, TDP and YSR-Congress.

Replying to a six-and-a-half-hour debate on the bill, home minister Amit Shah said the legislation seeks to provide citizenship to persecuted minorities in the three countries and not take away citizenship of anyone.

He rejected the Opposition charge that the bill was against Muslims and said they had nothing to fear.

The House rejected motions to send the bill to a select committee with 124 members voting against it as compared to 99 in its favour.

The House also rejected several amendments moved by opposition members to the bill, most by voice vote. The bill, which was passed by Lok Sabha on Monday, will now go to the President for his assent.

On why persecuted minorities from countries such as Sri Lanka were not part of the legislation, Shah said Tamils from the island country had been given Indian citizenship in the past and the present law is to tackle a specific problem.

To repeated questions from the Opposition on Muslims being left out, he said Muslims from other countries had the right to apply for Indian citizenship as per existing rules. As many as 566 Muslims have been given citizenship, he said.