Addressing a Tiranga Yatra in Surat via video conferencing, he also said the tricolour has been a symbol of the country's textile industry, khadi and self-reliance 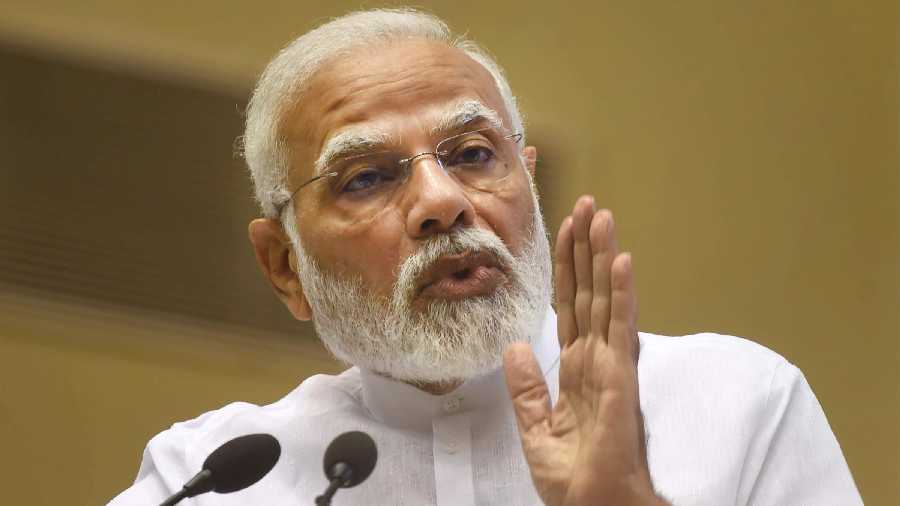 Prime Minister Narendra Modi on Wednesday described the national flag as a reflection of the pride of India's past, commitment to the present and dreams of the future, and said it stood for the country's unity, integrity and diversity.

Addressing a Tiranga Yatra in Surat via video conferencing, he also said the tricolour has been a symbol of the country's textile industry, khadi (a hand-spun and hand-woven fabric) and self-reliance.

"The tricolour of India does not only contain three colours, but our tricolour is a reflection of the pride of our past, our commitment to the present and our dreams of the future. Our tricolour is a symbol of India's unity, India's integrity and India's diversity," Modi said.

"Our national flag itself has been a symbol of the country's textile industry, the country's khadi and our self-reliance. Surat has always laid the groundwork for a self-reliant India in this area," he said.

The message that the Bardoli movement and the Dandi Yatra gave, united the entire country, he said.

"Our fighters saw the future of the country, its dream in the tricolour and never let it bow down by any means. When today, after 75 years of Independence, we are beginning the journey of a new India, the tricolour is once again representing the unity and consciousness of India," he said.Modi added that every corner of Gujarat is full of enthusiasm, and Surat has only added to its glory."In a way, a mini India is being seen in the Tiranga Yatra of Surat. People from all sections of the society are involved in this together. There is a garment seller, shopkeeper, somebody is a craftsman of looms, someone is involved in sewing and embroidery work, another one engaged in transportation or jewellery. The entire textile industry...people of Surat have made the event grand," he said.

The prime minister said Tiranga Yatras being held across the country are a reflection of the power and devotion of the Har Ghar Tiranga Abhiyan."From August 13 to 15, tricolour will be hoisted in every house of India. People from every section of the society, every caste and creed are spontaneously coming together with only one identity. This is the identity of the conscientious citizen of India," he said.

Men and women, youths, elders and all others are playing their roles in supporting the campaign, the PM said."Many poor people, weavers and handloom workers are also getting additional income due to the Har Ghar Tiranga campaign...These campaigns of public participation will strengthen the foundation of New India," he added.