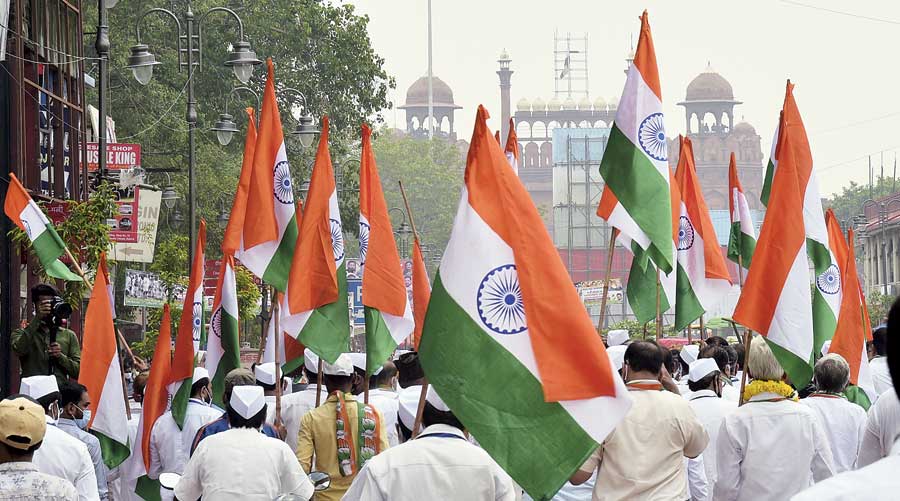 Tricolours are being imported from China, which is an insult to the freedom fighters and the national flag, the Congress leader claimed.
File Photo
PTI   |   Mumbai   |   Published 10.08.22, 11:23 PM

Maharashtra Congress president Nana Patole on Wednesday claimed that tricolours were being imported from China for the 'Har Ghar Tiranga' initiative launched by the Bharatiya Janata Party (BJP)-led central government.

He was speaking in Buldhana district as part of the Azadi Gaurav Padyatra of the Congress.

"A long struggle had to be waged to oust the tyrannical British rule. The country was united under the Congress flag and Congress's idea of taking everyone together brought independence to this country. People who have not contributed anything in this freedom struggle are today running events in the name of 'Har Ghar Tiranga' campaign," Patole charged.

Tricolours are being imported from China for this event, which is an insult to the freedom fighters and the national flag, the Congress leader claimed.

Patole further said that when the country became independent, not even a needle was manufactured in the country, but under the visionary leadership of Jawaharlal Nehru, India reached the pinnacle of progress.

"Indiraji and Rajivji sacrificed (their lives) for the country. But today's BJP government is selling the public companies that were created by the Congress and were the glory of the country. Schemes like 'Agnipath' are like rubbing salt into the wounds of the youth. Inflation, unemployment have increased tremendously. People are being looted by imposing GST on grocery items as well," the former MP added.

"China is encroaching on our borders, but the prime minister is not talking about it. On the contrary, attention is being paid to how they get financial benefits by importing tricolour flags from China," he said.

Patole alleged that the BJP came to power through lies and it cheated the people of the country and forgotten the promises made to the people.

Work will be done to expose the falsehood of the BJP by creating public awareness through this padayatra, he charged.

Legislature party leader and former minister Balasaheb Thorat participated in the Azadi Gaurav Padayatra in Dhule and Jalgaon districts. He met the families of freedom fighters at Krantibhumi Kapadne in Dhule district.