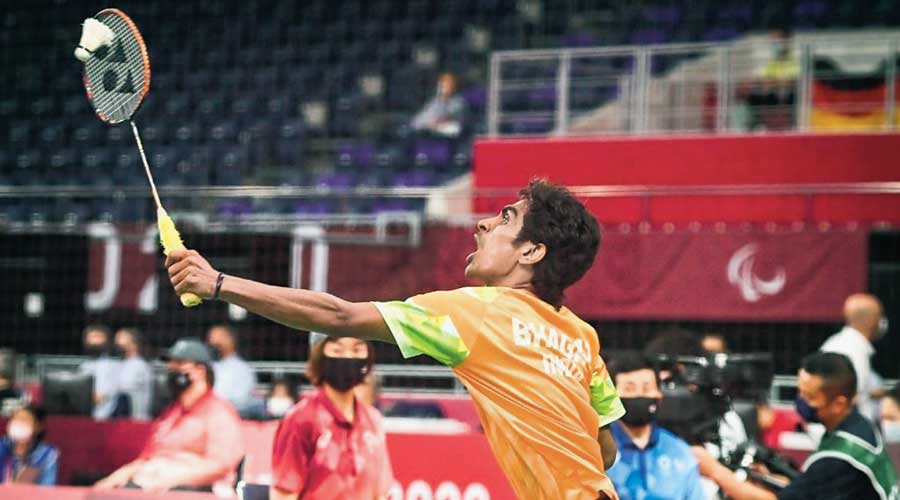 The hand that wields the racket and gifted India its first Paralympic gold in badminton used to repair fans once in an Odisha town.

When Pramod Bhagat, the world No. 1 in men’s para-badminton, leapt into the arms of his coach after the Tokyo triumph on Saturday, the moment stretched beyond the sporting arena and marked a milestone in his life-long battle with polio, poverty and the void created by the loss of his parents at an early age.

When he reached the age of four, polio had blighted his left leg. So poverty-stricken was the family that he could not complete his course at an Industrial Training Institute in Hirakud.

But badminton fascinated him. Pramod was 13 when he first witnessed a badminton match and was hooked to the game.

His younger brother Sekhar, who now manages the family shop, told The Telegraph: “No one can imagine how happy we are today. We have lost both our parents. No one is there to see the phenomenal glory my brother has achieved. I have seen how he struggled hard despite polio to reach this place.”

“When he called me from Tokyo after winning the gold medal, we both could not control our emotions. Our voices choked. The entire town is jubilant at his achievement. Sweets were distributed and crackers burst last night,” Sekhar said.

In Tokyo after the summit clash, Pramod dedicated the gold to his parents. “I would like to dedicate this to my parents and to everyone who has supported me throughout. I’m glad I could make India proud,” he said.

The eldest of the three brothers, Amod, works at a private company in Delhi.

Keen to master the game, Pramod first worked on his footwork and fitness and then honed the other tactical skills largely by himself in the initial years.

He played his first badminton tournament against players without disabilities at the age of 15 and won. There was no looking back after that.

In 2005 while taking part in a badminton tournament at Burla, he came in contact with para-badminton coach Shib Prasad Das. “He is very cool, determined and focused. He practises for seven to eight hours a day,” Das told this newspaper.

While practising at the Nalco Indoor Stadium in Angul, Pramod participated in the National Championship in Bangalore in 2006 and emerged victorious.

Pramod has over 40 medals in his kitty, including four Para-Badminton World Championships gold medals. With badminton being introduced in the Paralympics in Tokyo, he has become India’s first gold medallist in the sporting event.

Pramod has been conferred with the Arjuna Award and the Odisha government’s Biju Patnaik Sports Award.

“Golden moment! Congratulations to Odisha’s talent Pramod Bhagat who has won the country’s first gold medal in para-badminton,” Patnaik wrote on social media. “Your success has made the whole nation proud. Wishing you a bright future ahead.”

Pramod has thanked the chief minister for his support.

He is scheduled to reach New Delhi on Monday. “After he reaches Bhubaneswar, he will go to Attabira where residents are waiting to give him a grand welcome,” said Sunil Pradhan, another badminton player.